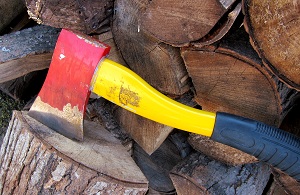 Often times you’ll here a company announce a stock split. If you invest in stocks long enough, you’ll eventually experience it yourself.

It’s not limited to stocks either. This can happen to ETF and mutual fund shares too. But how does it affect your shares?

What Is A Stock Split?

Say Company A has one million outstanding shares selling at $100/share and you own 100 of those shares. A two for one (2 for 1) stock split is announced. In this case, you’ll get two shares for every one you own.

When the stock is split there will be two million outstanding shares with a stock price of $50/share. The company’s market cap doesn’t change. So you get twice as many shares at half the price. As far as your stock, you still own the same portion of the company just through 200 shares.

It’s no different from you giving me a $10 bill and I hand you two $5 bills in return. It’s the same amount of money, just more bills to carry around.

Or you can look at like a pie, a pizza, or pint a beer. No matter how you slice it or dice it, it will always add up to the same amount.

What Is A Reverse Stock Split?

The same Company A decides to do a reverse split. It has one million outstanding shares still selling at $100/share. And you conveniently own 100 shares. A one for two (1 for 2) reverse stock split is announced, where you get one share in return for every two you own.

When the stock is split there will be 500,000 shares outstanding at a price of $200/share. The market cap doesn’t change, so you get half as many shares for twice the price. And your stock? You now own 50 shares.

If we use the same analogy, it’s as if you gave me two $5 bills in return for a $10 bill. It’s still the same amount of money, just half the paper to haul around.

Unfortunately 99% of all split announcements are irrelevant. So it shouldn’t affect the stock price, right? But it does.

There is some psychology to it. Would you rather have one share of a $500 stock or 50 shares of a $10 stock? Both are equal, yet the idea lingers that 50 shares is somehow better than one. Even though in this case, it’s not.

Then there’s the obvious difference between $500 and $10. People still view stock prices like they do the price of milk or a t-shirt. Where lower is more affordable. The company will argue that a lower stock price will open the door to more investors.

For these reasons the split is viewed as a good thing despite the fact that, again, nothing changes. Alternatively, a reverse split is viewed poorly. While small price changes do happen, it’s just a short-lived reaction to the news.

There is really only one benefit and it’s a small one – that is liquidity. More outstanding shares means more shares available to trade. Which should lower the price volatility and the difference in bid ask prices. This is more important when there are a small number of shares before a split.

So if you’re buying a stock because it split, think again. And if you own shares already, you’ll probably feel better about owning more. Just understand you are no richer after the fact, then you were before.