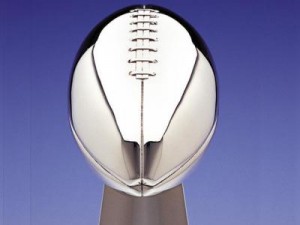 The Super Bowl is by far the best major sporting event, as far as I’m concerned.  Though I’d rather have a different NFC North team playing, this years game shouldn’t disappoint.  The good news is that you don’t have to root for either team if you plan on making money in the stock market, so says the Super Bowl Indicator.  The Steelers however could bring about the best possible returns.

The Super Bowl Indicator is one of those long tracked records that some on Wall Street believe helps predict the future performance of the market.  It sounds more superstition than fact, but it does have about an 80% accuracy since the first Super Bowl.  The theory goes that if a team from the original NFL (now the NFC) wins the Super Bowl, the stock market has an up year.  However if a team from the original AFL (now the AFC) wins the Super Bowl, the market has a down year.

Before you go throwing all your money into the market willy-nilly like, understand that it has more to do with pure coincidence than anything else.  There is no direct correlation to either team and any S&P companies performance.  If the market does well this year, I doubt the Packers were the actual cause, though I’m sure a few Packers fans may say differently.

Take it as a sign, a foretelling of things to come, or simply a coincidence.  I’ll enjoy the game for what it is, the best sporting event of year.  And if the stock market follows the Super Bowl Indicator, it’s a win-win for everyone.