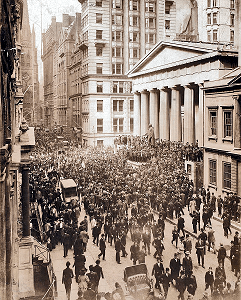 Crashes happen. That’s a risk we take when investing. Lets face it, most of us are better off not following the daily stock market news. Tuning out is one way to leave your investments alone. Until a crash happens, then it’s hard to ignore.

Some event triggers it all. The media showcases the emotion of the day. It starts with frustration, then worry, moves to fear, until panic sets in. It’s a process that sometimes takes weeks or months.

Headlines spread the scary news. A parade of experts all have THE answer for what will happen next. Each one is different and extreme. All of them are wrong. But it doesn’t matter, they’re “experts”.

Articles rehash the events for weeks, and months, along with every anniversary there after. We give these days colorful names like Black Monday and Black Tuesday.

At the time it all seems right. Looking back, much of it is overblown. Investors have a knack for overreacting, blind to everything beyond that day.

There is another side to market crashes that is rarely told. At least, not until years later. Amidst all the negativity and panic, a few investors see a glimmer of hope however far off into the future. What if that story was told sooner and more often? How would you react to news delivered in a different light?

Rewriting The Next Crash

Below is an article template for the next market crash. Be sure to replace the trigger event and percent losses and gains with the correct numbers at that time.

Stocks went on clearance today after the gradual 4 day sale brought in few buyers. The S&P 500, already marked down 11% last week, slashed stock prices another 14% today to bring bargain hunting investors back into the markets.

A few investors had the emotional dexterity to look past their paper losses and see the big picture. One of them, Warren, had this to say,”Who wouldn’t buy this stuff?! These are closeout prices. Come on. The S&P is like Rocky. It can’t stay down.”

It all started a month ago when something triggered it all. Nobody can agree on what, but it’s been a series of cascading events that’s turned frustration into the biggest buying opportunity since the Great Recession.

Still, few people are buying. Shortsightedness is the affliction of the day. Even CNBC reported rumors that the market would fall forever. One expert agreed.

Many investors even see these low, low prices as a reason to sell. Bob had this excuse, “I don’t know. This is like going into my favorite restaurant and seeing the entire menu half off. I’m used to paying twice these prices. Something’s wrong. It’s too cheap. I just won’t eat today.”

Don’t be that guy! It’s not the end of the world. It only feels like it. Ignore it all.

If this is your first experience of a crash, this is great news. You’re first thought is to protect your money and sell stocks. You’d be wrong.

Yes, selling now will make you feel better. It makes everyone feel better, until they wake up from the hangover and realize their big mistake.

Here’s how it’ll play out. Like every crash ever, we’ll look back on this panic as a great opportunity. But first, the market needs to bounce around and be all kinds of scary. Then it bottoms. And eventually things return to normal. The exact length of time is a little vague, but you get the picture.

Since you now know what happens, why wait? Be the first in line to that reality. The market will not stay like this forever and ever, as the “experts” keep saying.

And if you hesitate, don’t worry. This blowout sale will last a few weeks, maybe months, before it ends. You got time to buy everything at a discount. And if you can’t pull the trigger with new money, at least rebalance your old money.

But I’ll warn you. People will think you’re nuts because everyone hates stocks right now. Friends and family will say,”That’s crazy talk! You’ll lose more money.” You might, until some time in the future. The market won’t go down forever. You’ll get back your losses and more. You’ll outperform most investors because you did the hardest thing they couldn’t do. You bought the crash.