Major market indexes generally do a good job of tracking “the market” but they don’t always tell the whole story.

For example, if you only keep track of the S&P 500, you’re probably oblivious to the increasing number of U.S. listed stocks that have declined 50% or more from their 52-week highs. As the chart below shows, that number currently exceeds 2,000. 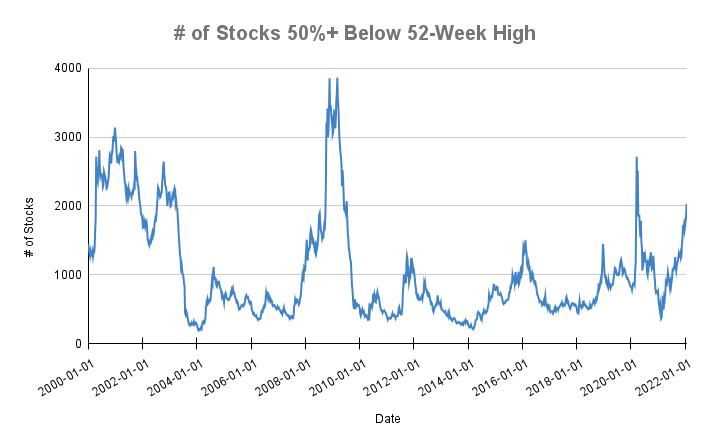 The last time we saw numbers anywhere close to that was March 2020 and, prior to that, the 2008 financial crisis (there’s no guarantee it reaches those heights). The point stands that a portion of the market has been hit hard over the past year.

In fact, over half of those stocks are concentrated in the technology and healthcare sectors. Which probably explains why over 75% of stocks down 50% or more from their 52-week highs trade on the Nasdaq. 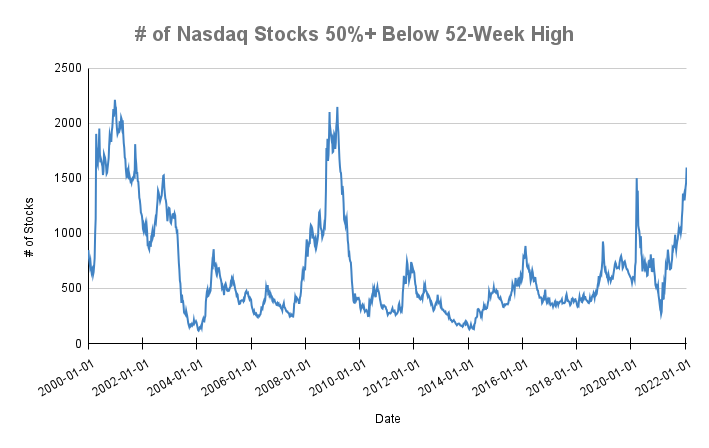 But the Nasdaq 100, which tracks the 100 largest Nasdaq stocks, tells a different story. Only 8 stocks in the Nasdaq 100 have fallen 50% or more from their highs in the past year. 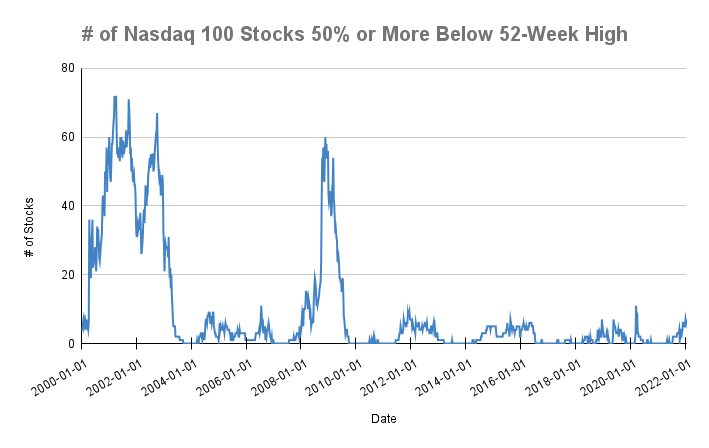 The S&P 500 tells a similar story. Only 9 of its 500 constituents have crashed in the past year. 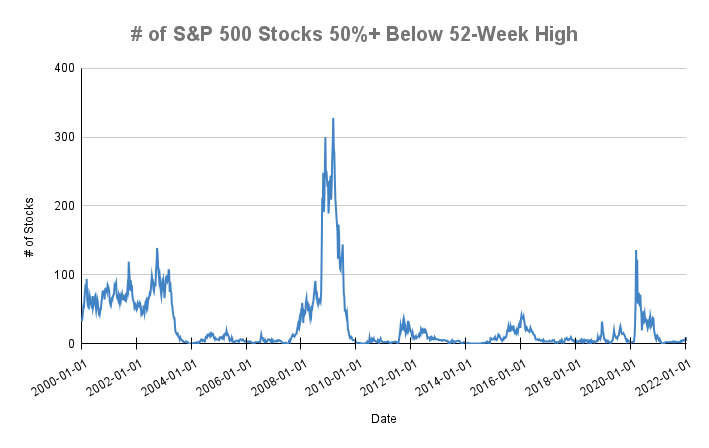 The Russell 3000 does a good job of hiding it too. Despite only being down about 10% year-to-date, almost 700 stocks in the index have fallen 50% or more from their highs. 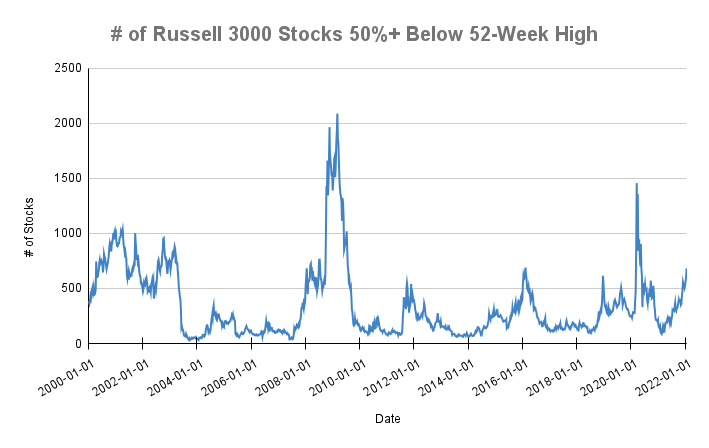 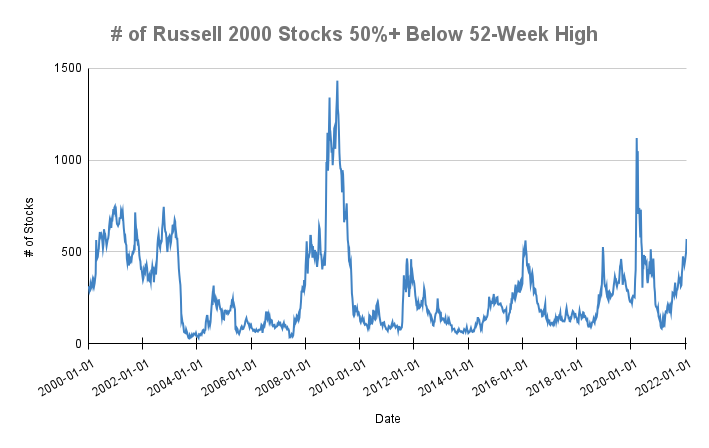 What’s interesting about the charts is that each spike in the number of stocks generally coincides with a market correction or crash but it’s not uniform across the major indexes. The current spike is a great example of that. It shows that the sell-off has been going on behind the scenes since mid-February 2021. Yet, anyone invested in funds that track the major indexes has been largely unaffected until now.

So what explains the sell-off? Some will pass the blame on the Fed, inflation, and/or higher interest rates. And maybe there’s something to it.

But the simplest explanation is that the speculative frenzy that followed the March 2020 crash plowed money into the “pandemic winners.” I’m sure each company had a wonderful story that gave a hint of it being a “sure thing.” The stocks became ridiculously overvalued and the market corrected that mistake. In other words, time revealed that the story didn’t mesh with reality, so investors started selling, which led to more selling, then forced selling, and here we are today.

Investors and gamblers alike that bought these stocks near the highs are learning an expensive lesson: stocks with stories of limitless upside should be viewed with a healthy dose of skepticism. In fact, much of it is the product of circular reasoning. The story is often a product of a rising stock price but the rising price convinces people that the story is true (funny enough, circular reasoning can be used on falling prices too).

The reality is most companies fail to live up to the hype. So investors pay twice for lofty expectations. First, when they buy a story stock at any price. Second, when its price plummets after the market realizes those expectations are impossible to meet.

Ben Graham had it right about requiring a margin of safety. Pricing in room for error helps avoid big losses.

Unfortunately, Graham was also right about human behavior. It’s hard to sit on the sidelines, ignore the optimism, and watch other people get rich faster than you. If you were able to do that the last year and a half congratulations. You’re better off for it. You’re probably also better prepared for what happens next. Market corrections and crashes are a normal occurrence (as the charts show). Those who are best prepared to endure the drawdowns are rewarded in the long run.

While it hurts to be on the receiving end of 50% losses, crashes have a cleansing effect on markets. It washes away the speculative excesses and leaves behind discounted opportunities for those who have a plan in place to take advantage of it.