Henry Singleton was one of the best capital allocators and Teledyne was his masterpiece. Stock buybacks were a big part of its success.

Singleton took advantage of an enthusiastic market and went on a shopping spree. Over the next five years, he had acquired 130 companies using Teledyne stock trading between 40x to 70x earnings. The shares outstanding quadrupled from 1965 to 1970 (mostly through acquisitions via stock, but also a 3% stock dividend — a dividend paid in shares rather than cash — paid on four of those years).

Then the 1970s bear market hit. Teledyne stock tanked. Its P/E dropped below 10.

An outsider only looking at the stock price would see a horrendous picture. An investment in Teledyne in 1966 would rise 235% by 1968, then tumble to a 40% net loss by 1974. It was a devastating round trip for anyone who hung on.

However, Singleton recognized that the acquisition party was over and decided to shift gears:

In this climate, where tender offers mean overpaying by managements which want to grow at any price, I prefer to buy pieces of other companies or our own stock or expand from within. The price for buying an entire company is too much. Tendering at the premiums required today would hurt, not help, our return on equity, so we won’t do it.

Since other companies were too costly to acquire, he bought back stock instead. Though, in Singleton’s era, buybacks were done through tender offers.

From 1972 to 1984, Singleton issued eight tender offers for common shares and one for preferred shares. In almost every case, existing shareholders seized on the offer. Only once did the number of tendered shares fall short of the offer. 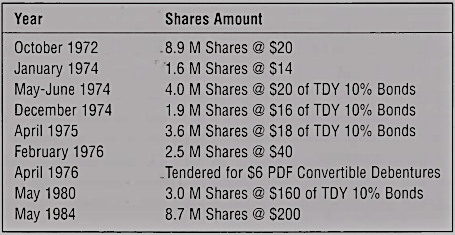 George Roberts, who worked alongside Singleton, described the experience like this:

Henry was quoted as saying, with a laugh, “In October, 1972, we tendered for one million shares and 8.9 million came in. We took them all at $20 and figured it was a fluke, and that we couldn’t do it again. But instead of going up, our stock went down. So we kept tendering, first at $14 and then doing two bonds-for-stock swaps. Every time one tender was over the stock would go down and we’d tender again, and we’d get a new deluge. Then two more tenders at $18 and $40.”

With the first six stock buybacks, a total of some 22 million Teledyne share were repurchased, reducing the number of outstanding common shares to less than 12 million. A seventh stock buyback offer was made in 1980 and the final one in 1984, at the extraordinarily high price of $200 per share. This was about $30 above the current market price and eight million shares were bought back. By September of that year the stock had climbed to $302 per share and was the highest priced stock on the New York Stock Exchange.

Singleton eventually paid off the debt used to buy back shares. By 1985, net income per share was $46.66. The buybacks created a compounding effect on earnings per share.

Singleton’s actions showed what happens when you add buybacks to the mix of an undervalued stock and growing earnings. The result was nothing but spectacular for shareholders who refused to sell:

Shareholders who had stayed with the company from the first buyback in 1972 had achieved a gain of some 3,000 percent by [1983]. In the nine years, from 1969 to 1978, our operating results were exceptional as well. Annual sales had increased 89 percent and net income increased 315 percent… Henry Singleton had an unmatched record in his era of value creation. An investor who invested in Teledyne stock in 1966 was rewarded with an annual return of 17.9 percent over 25 years, or a return of 53 times his invested capital. That compares to 6.7 times for the S&P 500, 9.0 times for General Electric, and 7.1 times for other comparable conglomerates.

Source:
The Singular Henry Singleton
Distant Force: A Memoir of the Teledyne Corporation and the Man Who Created It