There are decades where nothing happens; and there are weeks where decades happen. – Vladimir Lenin

If you feel like the last few weeks have lasted forever, you’re not alone. Here are my thoughts going forward.

The administration’s reaction to the virus was nonexistent until the market slapped them upside the head. They finally appear to be taking the coronavirus seriously. Everyone else must follow suit if they haven’t already.

First, is an increase in mass testing for the coronavirus. That means an abrupt end to social media posts about people being turned away from the ER or doctor’s office because they don’t meet the “requirements” for testing. This has been a horrendous failure of the administration so far. 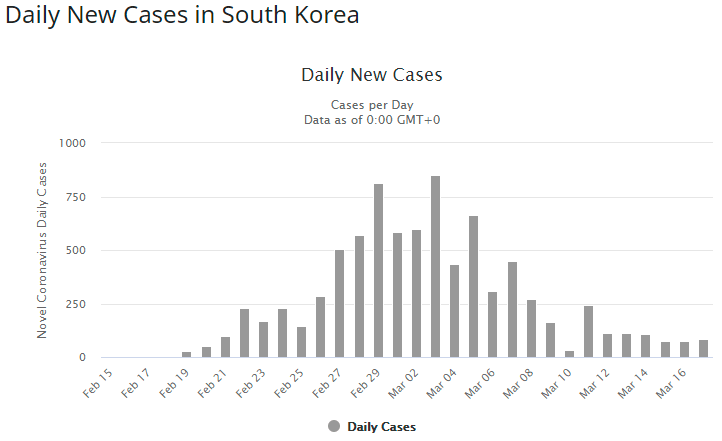 The U.S. (and the rest of the world) need to catch up…and fast. Thankfully, there’s a model on how to do it. It just needs to be implemented.

Right now, the lack of testing makes it impossible to know how far-reaching the virus has spread. Until then the number of confirmed infected will continue to compound.

Even at mass testing capacity, the numbers will appear to get worse at first. But if you look at the graph above, notice the peak and decline, before it tails off. Identifying those infected, insolating, and treating them is what slows and ends the spread of the disease (increased hospital capacity — beds, ventilators, medical supplies — is the next important step to avoid a surge in the fatality rate).

Second, is a simple, common-sense fiscal stimulus. Way too many people will be financially affected by this. If the government is telling people to stay home, and not work, then Congress needs to cut them a check to cover the next month, and each month after, for as long as this drags on.

We can’t have people worrying about rent and their next meal because they did what was asked of them in order to protect the populace. They need enough money to cover the basic necessities of food, rent/mortgage, and utilities. Whatever Congress comes up with, this must be part of it (mentioned yesterday, but nothing is official yet). It’s that simple.

Those two things won’t make everything immediately better. It will still be a struggle, but it should set the floor on the worst-case scenario. It also will leave the country better off once we get through this and the economy starts recovering. Which should inspire confidence for investors, markets…everyone.

Being cooped up won’t be fun in the short-term but it’s the best option for a bad situation. I suspect cabin fever will set-in quickly for many.

But imagine the impact of the population let loose on the economy once the all-clear is given. By canceling all extra-curricular activities, disposable income sits idle and growing (I get that not everyone has this luxury). They can make a big impact on the economy when this is done.

If this happens to describe you, consider putting some of that money to work now. Donate to your local food bank or if you have a favorite local restaurant, order to go or buy some gift cards to enjoy once this blows over because it will eventually. (Any restaurants or bars forced to close temporarily may be closed permanently if this drags on more than a few months. Restaurants are notoriously low-margin. They could use some support. Every little bit counts when it comes to surviving this ordeal. Additional stimulus from Congress to protect businesses, would go a long way in ensuring a quick economic recovery while saving jobs.)

Until then, grab a book, start a puzzle, learn something new, binge-watch that show you’ve been putting off, or go for a walk.

A few other random thoughts: