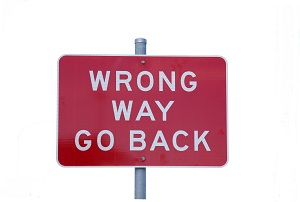 When you do a Roth IRA conversion, the entire amount converted to a Roth IRA is taxed at your current income tax rates.  If you’re sitting at 10% or 15% it might be worth it, if you’re pushing for a better, higher paying job.  As you move up in tax brackets your chances of being in an even higher tax bracket in retirement diminishes.

How much income do you plan on having in retirement?  More than you’re making now or less?  Most people can expect to make about 75 – 85% of their current income.  Which means, day one of retirement, you can expect to pay taxes on about 20% less income than when you were working.

The only reason you should consider a Roth IRA conversion is if you know with 100% certainty that your retirement income will be higher than it is now.  Which leaves the unemployed and maybe a few 20 and 30 somethings that haven’t started moving up the income ladder.  It also means that many people are already in their max tax brackets or close to it.  Why would you pay the highest tax rate now instead of waiting to pay a lower tax rate when you retire?  It makes no sense and it’s a waste of money.

Taxes must be paid on the amount that you would convert to a Roth IRA.  Depending on your current tax bracket and the amount you convert, those taxes can add up to large sum.  Whether you can afford to cover the tax costs should be a big deciding factor in a Roth IRA conversion.

You’ll need the cash on hand to cover all the taxes.  Borrowing or using money from inside the IRA won’t cut it.  Taking on debt to cover any taxes is not a smart choice.  If you’re thinking of using money inside the IRA to cover the taxes, think again.  You’ll be hit with the 10% early withdrawal penalty if your under 59½.  Which only loses you more money.

3. The Balance Dropped In Value

One of the benefits of a Roth IRA conversion is having the option to undo or “recharacterize” the conversion back to a traditional IRA.  This benefit allows you to undo an unwanted conversion or possibly save money if the balance drops in value.  Not taking advantage of this do over could cost you money.

The taxes you pay are a percent of the balance of the IRA.  If that balance drops in value, you can undo the conversion and reconvert later at the lower balance.  A lower balance means less taxes you have to pay.  A significant drop in the balance can mean big savings.

There are a few things to consider before you undo a Roth IRA conversion.  First, you must wait 30 days before reconverting and it can’t be done in the same tax year as the original conversion.  So there is some risk involved with having to wait.  Second, if the balance grows during that waiting period, the process could backfire and you could end up paying more taxes.  Third, there is a deadline to undo a Roth IRA conversion, don’t put it off till the last-minute.