Tom Russo gave a presentation on finding companies with the best chance for long-term success. The primary thing he looks for is the “capacity to suffer” in the short term in order to grow the business over time. I covered some of his points below.

Before I get to it, I want to make a rather obvious point. To invest in companies with a “capacity to suffer”, you must be able to suffer along with it. In other words, you need a high tolerance for short-term pain.

Of course, this is true whether you own one stock or an index fund. We all want our investments to work immediately, but it never works out that way. So you’re left with two choices: you can focus on short-term results or you can lean toward delayed gratification. The market is very much focused on the former. Most of investing – financial success, really – is based on the latter. 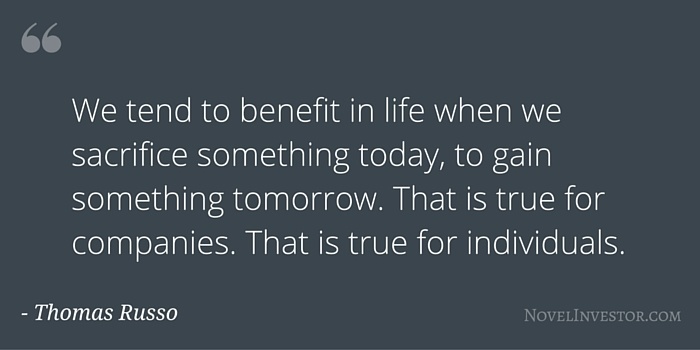 Russo looks for compounding machines – he wants companies with the ability to reinvest at a high rate of return – which leads him to strong global brands. These companies typically have a “capacity to suffer” because of a culture focused on long-term growth.

Russo finds a lot of opportunity in family-controlled businesses:

The strength of the brands tend to allow for more regular free cash flow because of the pricing power that you get. The likelihood of finding owner-minded businesses goes up with consumer brands because they tend to have been, over the life of the company, more self-funding. You think about why it is that most American companies don’t end up with control shareholders, because if you’re in a crummy business, it takes a lot of money to grow and you have to raise additional equity again and again and again to fund the growth. And at the end, if it’s a sufficiently competitive crummy business, you’re going to have horrible results and no controlling shareholder. The presence of a business that still has control held by the family is evidence of the fact that the business is, at its heart, quite cash generative.

Russo makes a point to highlight Warren Buffett. Berkshire Hathaway is all about long term gains at the expense of short-term pain.

In 2007, he had $50 billion in cash. He turned down a 4% interest rate on longer-term bonds or $2 billion in annual interest for 0.1% because of the aforementioned trust issue and the optionality the more liquid “cash” holding offers. Because he did this, he “helped” GE, Goldman Sachs, Bank of America, and more survive the financial crisis and helped Berkshire to huge long-term gains in return.

Berkshire’s “capacity to suffer” is driven by its “capacity to reinvest”. Buffett’s ability to avoid short-termism lets him find and buy high-quality companies at great prices, which drives its long-term success.

This doesn’t mean we all need to start sitting on giant piles of cash waiting for the next big opportunity. But as investors, you need a capacity to suffer short-term pain when owning stocks.