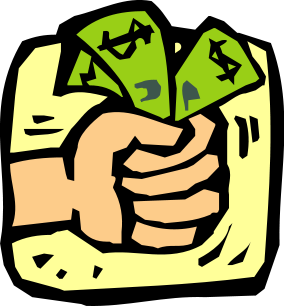 There are only two ways of improving your financial situation and neither involves an insurance scam, lottery, gambling, selling a kidney, or a myriad of other legal or illegal activities.  In fact both are covered abundantly on finance blogs and websites.  Yet the topic is skirted around rather than just getting to the point.

No matter how you dress it up, rewrap it, spin it, discuss it on a per item or action basis, improving your finances only comes down to two things.  Spend Less and Earn More.  Doing both is not required but it certainly makes improving things easier.

Spending less is a simple concept.  Take what you spend now and stop spending so much of it.  Take it down to a bare bones approach.  Other sites will go on and on about all the different ways to spend less.  If you can’t figure out how to do it on your own.  You’ll never take the first step.  Do a budget, write down everything you spend money on each month, grab a red pen and start marking all the areas that spending can be cut.  See how much extra you have at the end.

This is a topic written about every day.  I see dozens of posts each week telling me how to lower my cable bill, spend less at the grocery store, save on gas, insurance, mortgage, the list goes on.  The posts are informational but it all breaks down to spending less.  If you want to save money on your cable bill, cancel it.  You just saved a lot of money.

I could cover my bases and write 1,000 more ways to spend less money.  Here is a hint to the ending, stop buying it.  You see I don’t know your situation and what you spend money on every month.  You do!  Just be frugal with your money.

There is only so much money your current job is going to pay.  You can ask for a raise.  If your boss says “yes” great you just knocked out number two, earn more.  Unfortunately when you go back to work next week and ask again, I don’t see another “yes” in your future.  If it works two weeks in a row, turn around and ask for more.  You are either underpaid and your boss knows it or they are gullible, take advantage of it.

Your pay is limited unless you prove to be such a major asset to the company that it needs you more than you need it.  When you reach that point you have something called leverage.  Even if the boss won’t pay more, some other company will.  That’s a good situation to be in.  You’re a wanted man or woman, an asset with expertise.

Being an asset for a company isn’t the only option.  The other is to be an asset for yourself.  Become your own income generating machine.  It may just be with a second job or a hobby turned into an income earner.  The goal is more money coming in than yesterday.  Start with a few dollars and turn it into a few hundred.  It doesn’t need to be significant, a small amount is all you need to get the ball rolling.

Doing both provides the best outcome.  Less going out and more coming in is a great situation to be in.  It increases your chance of success.  With one, there is too much risk at having an uncontrolled event slow things down.  With both going on, if spending has to increase for a month, the extra income is there to help.  If income drops a bit, you are already spending less and the difference is covered.

The hard part is getting started with both.  But it only gets easier months and years down the road.  Consistency is the key to put you on a path to future prosperity, independence, and wealth.  It doesn’t happen over night.  But it will get progressively better.