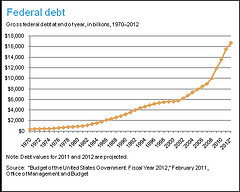 There’s been a singular view that has swept through the nation over the past few months since the debt debacle back in August.  Apparently the U.S. has too much debt.  The U.S. government currently has over $15 trillion in outstanding debt obligations.  Some view it as excessive, wanting it paid down to a reasonable level.  Others believe it should be eliminated entirely.

This isn’t the first time that the U.S. debt has become a political hot topic.  The last time was back in 1992, when then presidential hopeful, Ross Perot made eliminating the deficit a major campaign issue.  Clinton eventually was elected, signed the Deficit Reduction Act of 1993, and all was better.  For the most part, until you fast forward to today and it’s playing out again.

A Super Committee was set up to solve the debt problem.  It failed, not surprisingly.  Putting debt reduction as a major talking point in the next election cycle.  On a side note to the government, don’t name a committee “Super” if it’s bound to fail.  It tends to destroy all meaning of the word.  Anyways, the committee’s failure enacts forced spending cuts starting in 2013.  Being that far out, they’ll never see the light of day.  But enough about politics.

Another way of looking at this debt issue, there is currently about $15 trillion invested in U.S. debt.  Used as a safe haven for money, backed by the full faith and credit of the United States.  Which is the biggest argument that the debt level is fine for now.  That $15 trillion can’t be wrong, can it?  If excessive spending continues, sure the debt becomes problematic.  But that could be years from now.

Which brings the question, what to do about the U.S. debt?  Pay it off entirely or just pay it down?  I’m all for paying it down to some reasonable level.  Possibly with a cap limit as a percentage of GDP.  But paying it off entirely.  I believe does more harm than good.  Sure a debt-free U.S. sounds good.  If it’s good for a household it’s good for the government.  Right.  I’m not convinced.  A debt-free U.S. means no treasury bonds, bills, notes, or TIPS.  That government bond fund you invest in wouldn’t exist.  It would change how retirees invest their money.  Forcing riskier investments at a time when risk taking should be minimal.

All of this doesn’t take into account the treasury bonds role in interest rates and monetary policy.  Treasury rates are the benchmark for bank lending rates.  Mortgages and other loans would have to be tied to some other riskier benchmark.  The Federal Reserve buys and sells treasuries in order to affect short-term interest rates and the money supply.  The Fed can use other assets when it comes to monetary policy.  But it does so with added risk.

Simply put less U.S. debt forces riskier investments.  Pension funds, 401k’s, the Social Security Trust, the Fed, foreign central banks, commercial banks, institutions, and individuals would all be affected by this.  By eliminating U.S. debt, it only increases the risk these funds must take.  There is a bigger need for a liquid risk-free investment choice and U.S. treasuries are the only option that fills that role.

With all the debt discussion how important is it really that the U.S. eliminate it’s debt?  Pay it down I understand.  But paying it off entirely is a bad idea.  It would force too much money into riskier investments.  Including your money.