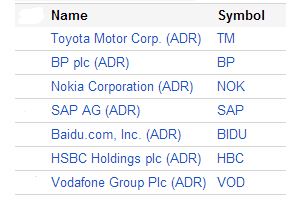 There are many ways to invest in foreign companies.  International funds are the most common.  But what about individual stocks?  An ADR is an easy way to buy foreign stocks through your broker.

This process makes it easier for investors to gain access to foreign companies like:  BP, Toyota (TM), or Nokia (NOK).  Which are all American Depositary Receipts traded on the NYSE.

Toyota, for example, has an ADR ratio of 1:2 (one ADR for two Toyota shares) and started trading on the NYSE in 1999.  Before that, if you wanted to invest in Toyota, you had to open a trading account in Japan and convert your dollars to yen just to buy the shares.  It’s not the easiest or most cost efficient way to invest internationally.  That said, an ADR doesn’t eliminate the costs entirely.

The U.S. depositary banks don’t issue ADRs for free.  The record keeping, compliance, and other services are passed on to investors as custody fees.  Generally, the custody fees are taken out of dividend payments before being paid to the ADR holders.  Or, if dividends aren’t paid, the fees are charged to your broker and passed down to you.

Like any investment, American Depositary Receipts, have its risks.  The biggest being political, currency and regulatory risks:

The ease and convenience can outweigh the risks in many cases.  Good research will eventually remove the bad apples.  There are alternatives to limit your risks too.  You can look into ADR indexes and ETFs.  Or, focus on U.S. companies that do more business overseas.  Either way, ADRs offer a convenient way to invest internationally.