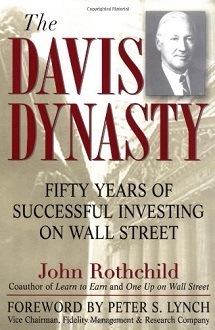 Who the hell is Shelby Davis? That was my first thought after I heard the name from a reader’s comment on recommended investing books. So I added it to my growing wishlist to check out later. Later finally happened and here’s the answer. He’s probably the best investor you never heard of.

The story of Shelby Davis is reminiscent of today. Interest rates were at all time lows. Bonds were loved and stocks were loathed. Davis did the one thing most investors wouldn’t do. He bought the most hated, boring stocks he could find and stuck with it his entire life.

Davis was an unknown. He didn’t build a company or manage a fund. He avoided the media. He only managed his money wisely. He was THE millionaire next door until the Forbes 400 list of richest Americans outed him in ’88.

Davis lived by the principles we so often forget or ignore. The Davis Dynasty shows us what’s possible even if we get started late.

10. Save to invest more, not invest to save less.

Shelby Davis was extremely frugal. He saved old shoes with tape and glue. Their old stove was so rusty flakes sometimes fell in the food. The kids hounded him for a swimming pool. He agreed, only if they dug it themselves.

But he wasn’t being frugal for the sake of saving money. He hated being wasteful. Why waste money that could be invested? He understood the future value of his dollar, invested wisely, was worth far more than today.

9. The power of compounding compels you.

Davis’ grandson tells the story of the day he asked for a dollar to buy a hot dog. Davis responded:

Do you realize if you invest that dollar wisely it will double every five years? By the time you reach my age, in 50 years, your dollar will be worth $1,024. Are you so hungry you need to eat a $1,000 hot dog?

Every dollar you earn has value today but don’t ignore its future potential. The critical ingredient is time. Luck and stock tips might help win the short-term trading game for a while. Nothing beats time and the power of compounding returns. Wise, winning investing requires years of appreciation.

Too many investors spend most of their time protecting themselves from the past while ignoring the future. Even an amateur market historian has the foresight to recognize when investor behavior and current market events mimic the past.

The book is filled with glimpses of market history stretching from the 1920s up to the dot-com bust. The biggest history lesson you can learn is that the market cycles from bust to boom and back again. Investor behavior flows with it. Each time is slightly different but similarities abound and the cycle always rolls on.

7. Stocks beat everything long-term despite the pessimism of the day

Short term fear and pessimism keeps most investors from ever realizing great returns. Of all the possible assets, investors have the biggest love/hate relationship with stocks. Great performances become a love fest, while terrible ones bring fear and loathing.

Between these two extremes, and what investors forget, is a great long-term track record at compounding money that no other asset class offers. The few times in history when there is an exception, investors rarely seized the opportunity because they projected their short-term pessimism far into the future.

Long term Treasury rates bottomed in April 1946 at 2.03%. At the time, a survey done by the Fed showed that 90% of investors preferred bonds. They’d rather earn 2% compounded returns, despite losing money to inflation, because they weren’t losing money in stocks! The rare exception in the ’80s watched 30-year Treasuries rates hit 15%, while investors saw high inflation and passed.

Not looking beyond the worry of the day causes most investors to miss obvious opportunities.

Out of crisis comes opportunity…A down market lets you buy more shares in great companies at favorable prices. If you know what you’re doing, you’ll make most of your money from these periods. You just won’t realize it until much later.

Bear markets make people a lot of money, they just don’t know it at the time.

Don’t be concerned about timing the bottom. Remember, Davis was stingy, but he never tried to time the market. He recognized cheap and waited. Among the many opportunities, Davis bought the ’87 crash. He lost $125 million on Black Monday, but was happy because everything he bought was a bargain.

“Buy stocks at any price” never works out in the end. Imagine a store that sold food and clothing “at any price”. When and how often would you buy?

Fast growing companies and hot stocks of the day are fun to own but fall the hardest. Earnings, then expectations, eventually falter. Market history is filled with these stocks that ended badly – the tech stocks of the 60s, the Nifty Fifty, and the dot-coms. Each time investors got burned.  So why overpay for earnings?

Davis’ use of debt was tied to his ability to grow wealth. He didn’t borrow to pay the bills or to buy a house. He used leverage to boost returns when stocks were at bargain prices. When he couldn’t do that, he didn’t borrow. Davis made debt work for him.

I don’t recommend you invest on margin (borrow to buy stocks). But borrowing to buy stuff that doesn’t offer any return on that money only forces you to work for that debt in the future. The best investment anyone can make is to pay off credit card balances and high interest loans, especially when stocks don’t offer a comparable return.

Davis wrote a weekly bulletin for most of his career. Few people ever responded or acknowledged it. Except his grandson who questioned why. The response:

It’s not for the readers. It’s for us. We write it for ourselves. Putting ideas on paper force you to think things through.

I’ve seen this repeated many times before. Writing speeds up the learning process by improving retention and helps solidify complex topics into simplified ideas – a lesson I’m still learning.

Learning something like the piano, basketball, or walking are skills that take time to master. Once the basic steps are down, the learning accelerates quickly. Anyone who’s watched a child learn to walk for the first time, knows there’s a lot of falling involved but they always get back up. A childlike determination is needed to learn investing too.

Trying to repeat that performance is an outrageous goal. Not everyone starts with $50,000, a bull market, and the stomach to take big risks. What about a fraction of it? Is $2 million possible? Absolutely!

Start early if you can. Just know that the game isn’t over because you showed up late. You can still win. You’ll need to push yourself harder because sacrifice is needed to make up for lost time.