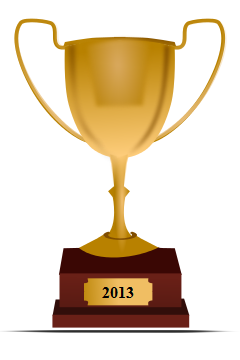 Every year the market never fails to surprise us with big winners and losers. The S&P 500’s 22% rise was one winner, but it wasn’t the best and far from the worst. This is the third year for the best and worst market awards with the focus on finding this years best and worst performing investments across several categories.

I do this every year for three simple reasons. The first, its fun to see the winners and losers of the year and compare it to earlier years.

Second, we might actually learn something. Outliers exist inside of every market that offer greater rewards and risks than your typical index fund. Whether it fits your investment strategy or not, finding out why can be helpful if not educational.

Third, it stands as a reminder that every year is different. The old disclaimer about past performance is true. You only have to look back at last year’s awards to see that it doesn’t guarantee future results. That said, investments don’t stop being naughty or nice because the year is over either. And whatever you do, don’t blindly invest off this list before doing some research first.

Here’s a quick rundown of the rules before we begin. Penny stocks and leveraged funds were removed for the obvious reason that I don’t believe either belongs in 99% of the portfolios out there. Instead, I kept the focus on well-known companies and fund categories everyone might recognize or have in their portfolios.

Fad of the Year

Bitcoin – Every year there is something that gets investors all worked up. The media hypes it. Investors start talking about it. Or it’s the other way around. Either way, it builds and grows into a life of its own. It’s exciting and soon enough the price skyrockets. Then everyone wants a taste.

Well, back on January 1st you could have bought one Bitcoin for $13.50. It’s now priced near $800 after falling from $1,200. That’s a ridiculous 5800% return this year. You can call it a bubble or maybe its something bigger. With Bitcoin ETFs, exchanges opening to trade it, and other virtual currency competition being introduced, where does it go from here? Who knows. I’ve never speculated on currency, virtual or otherwise, and I don’t plan to start now.

Netflix (NFLX) – The television hasn’t been the same since the DVR came around. It’s allowed viewers to watch shows and sports on their schedule and not the networks. With the help of the internet, Netflix has built a simple on demand business model for a small monthly fee.

But will subscriber growth and earnings increase fast enough to account for that? Maybe I’m missing something but I don’t see it. Then again, Netflix hasn’t been on my value radar since the crash.

JCPenney’s (JCP) – This old school department store is still alive and kicking after 112 years. Barely. You can say it’s been a bad year for JCPenney’s. First, it’s CEO was run out of town, then it rehired its former CEO, the same CEO who was fired for poorly running the company. Then it put together a financing package backed by assets to pay the bills. Finally, a secondary IPO to raise more money only diluted the share price further.

It’s also proof that following hedge fund managers can be rough. Bill Ackman bet his reputation on JCP and did his best used car salesman imitation trying to push it off as a good investment. Eventually he gave up and sold for a huge loss. All told JCP started the year at $20.84 a share and fell to $8.48 for a 59% loss.

Starz (STRZA) – if you have cable TV, you’ve probably heard of Starz or at least had it offered to you as an incentive to bump up your cable plan. It offers premium channels much like HBO. Back in January, it was spun off from Liberty Media at about $14 a share.

I’ve covered the basics of spinoffs before. In this case, the Starz business accounted for a large part of Liberty Media’s growth and revenue that wasn’t reflected in the stock price. There was the opportunity. The only downside was the small chance of a sudden drop off in subscribers. Starz is now trading at $27.33 or a  99% return. I noticed it late, buying in at $16.20 for a slightly lower 68% return.

Best Buy (BBY) – Funny how things change in a year. Best Buy made this list last year as the Worst Dividend Stock of 2012. Oh how far it’s come. It’s been nothing but good news for BBY shareholders. The stock started the year shy of $12. It’s since risen to $40.67 (a 239% return sans dividends).

So why the price rise? The reason was cost cutting through layoffs, store closures, and a sale of its mobile phone venture in Europe in order to streamline the business.

Annaly Capital (NLY) – Okay, Annaly Capital isn’t the most recognizable name on this list unless you’re into high yield stocks. It’s actually a mortgage REIT that has payed a consistently high dividend yield for years. Unfortunately, it’s business is affected by interest rate changes. This REIT basically acts like a bond. When interest rates go down, the stock price will rise and vice versa. Which is part of the cause this year. The other was two consecutive dividend payments that were each lower than the last.

Higher interest rates pushed NLY down from $14.32 to $9.98 and a 30% loss for the year. That 13% dividend yield might look enticing now but I don’t believe the worst is over. There is still a lot of interest rate risk with talks of the Fed tapering it’s QE program. But it might be worth revisiting after the Fed starts to taper.

Small Cap Stocks – it’s been a great year for stock index funds. Large cap funds are averaging 26% year to date. But it’s the small cap funds that shined this year up 32%.

This should be a good sign for the economy. Small cap companies profit mostly from their domestic business growth. The simple nature of being smaller allows these companies to be more nimble to take advantage of changes. That flexibility helps push further economic growth.

Long Term Government Bonds – 2013 was not a great year for bond funds. Just how bad depended on the average duration of that fund. The long-term 20 to 30 year duration bonds were the worst performers this year.

The reason for this is fairly simple. Bond yields and prices move in opposite directions. That movement is influenced by interest rate changes. If you owned a long-term bond fund this year, when interest rates rose, the price of bonds fell, which lowered the value of the fund. That’s where you get this year’s losses.

Solar – the solar industry did terribly in 2011 and didn’t do any better in 2012. Much of that had to do with subsidies being cut as world governments cleaned up their fiscal act.

A lot has happened in the past two years. Increased competition drove the weakest links out of business. That left this sector healthier overall and its performance this year was proof. Both solar ETFs, the KWT and TAN easily beat the S&P 500 this year, up 86% and 106% respectively.

Gold Miners – it was only a few years ago when gold was the “it” investment. You had to have it if you wanted to protect your money. Well, things have changed. Those fears from five years ago are gone. The price of gold hasn’t done well this year. The companies that dig for this metal did worse.

When your business is finding this yellow metal and the price of gold falls, there’s a good chance your business will suffer for it. That’s exactly what happened this year. The gold miner ETF like GDX are down over 55% this year. It just goes to show that prices of this fickle metal are as much driven by demand as it is by emotion.