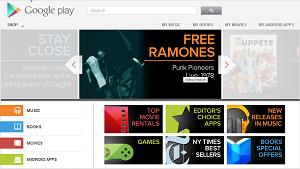 I was surprised to see the new Google Play feature at the top of the Google home page this week.  I hadn’t heard about a release date.  But I knew it would happen eventually, just not this quickly.  So why all the fuss?  Well, it’s definitely a new place to shop for all things digital, but it may offer an interesting investment opportunity.

Google Play is the new competitor on the block in the digital distribution service offering music, movies, books, and apps.  With its introduction, Android App Market, Google Music, and Google eBook store will be merged into a one stop shop for all things digital.

You can store it all on the cloud, making it easier to use across multiple devices.  That means you can reach anything and everything from your desktop, laptop, smart phone, and tablet.

Buying things online is nothing new.  But the transformation to digital is still new.  The four big players in the space are Amazon, Apple (through iTunes), Netflix, and now Google.  What sets Google Play apart?  Not sure.  A good example to look at is movies.  With Apple, downloading the iTunes software is required to get any of the products.  With Amazon you can buy the DVD, the Blu-ray, or the digital video download.  Netflix was the first mover in the space, but is entirely limited to movies and shows, but does offer DVD or digital.  With Google Play everything is digital only and movies can to be rented.

Imagine getting home from work, turn your TV on, check your email, Google Plus, Facebook and every other social site, hit up Google Play order a movie or watch your favorite show.  No need for a DVR, Blu-ray player, or cable box.  Don’t like Google Play, there’s always iTunes or Amazon.

You don’t have to watch on the TV either, anything with internet access works.  The smart phone, tablet, laptop, iPad, XBox, Wii, and PlayStation will now be your connection to all things digital including your favorite TV shows.  With all the new electronic devices introduced over the past few years, the television is still the holy grail of revenue.  That’s why these companies are pushing for your attention.

Why is it important?  It puts the cable box and tv packages at risk.  Imagine if the TV networks got on board.  The cable providers will have to adapt to the technology change or die as we watch how faster data transfer speeds have become a necessary evil in the advancement of the couch potato.

My brief take on the new service would suggest that Amazon and iTunes shouldn’t be worried.  The cable providers should be and some have already started partnering for their share of the digital distribution pie.

My biggest concern is still data download speeds.  It’s irrelevant for music, books, and apps, but streaming movies and TV shows are another thing.  It’s one thing to watch a small 480p video on your computer.  It’s another to watch a full 1080p HD movie on the spot.  Average downloads speeds haven’t caught up to the technology needs.  But it will soon.

Digital is the final frontier for the entertainment industry.  As we progressed from records to 8-tracks, cassettes to CDs, digital has been unchanged for the past decade now.  As more people move over to the digital distribution services, it will eventually carry the most profits.

From an investment perspective, this is in direct competition with Amazon and Apple.  Not surprising really, it’s just a necessary step forward for Google Android.  It certainly makes Google an interesting investment going forward.

The digital distribution service offers some advantages.  There is no inventory to maintain (it’s all servers folks), so profit margins are increased.  Plus it gives an immediate use for Google Wallet, by cutting out the payment processors (Visa, MC, American Express).  Which could be just as big if it’s quickly accepted as a payment method.  Early acceptance will push Google Wallet into other online transactions areas.   Not a bad deal.

This does put Google in direct competition with Amazon, the biggest online retailer, and the growing success of Apple’s iTunes.  But it offers some much-needed competition in a space that is basically dominated by iTunes, Amazon, and the regional cable providers.

Netflix is another option, but it now has more competition it can handle and it will only get tougher for them with its increasing costs.  From an investment perspective, Netflix couldn’t be riskier.  It’s pricing model is already under fire as unsustainable from a profit perspective.  Maybe it’s a buyout candidate for one of the cable providers or Microsoft.   But I wouldn’t hold out hope for that either.

The one advantage Google has is search.  Every time someone searches on Google, the opportunity is there to sell something.  It’s a dream scenario for an online retailer.  In February, Google had 11.7 billion searches alone.  That doesn’t include the daily Gmail and Google Plus users.  Add in the fact that mobile and the Android platform is still taking off, Google puts itself in a major competitive advantage.

But Google isn’t a retailer.  Which is where the risk lies.  Google has only been successful with one business model, search advertising.  It never puts much advertising focus on its side businesses, either.  If Google puts a full court press around the new service, it could easily grab a good part of the digital distribution market from advertising alone.  I have yet to see one ad for the new service.  For now, I’d favor Amazon over all others just for its retail dominance.

The other interesting option is Comcast.  Which recently signed a deal with Microsoft to have its Xfinity on Demand service offered on the XBox.  It’s just a start to being cable box independent and allow Comcast a nationwide service.  Expect other cable providers to follow suit.  It will be interesting to see which provider will embrace an online only TV package first.

The transfer of revenue from cable provider to digital distribution service is the long-term goal of Google, Amazon, and Apple.  Time will tell if the cable companies will embrace the technology change or avoid it like the music industry did a decade ago.