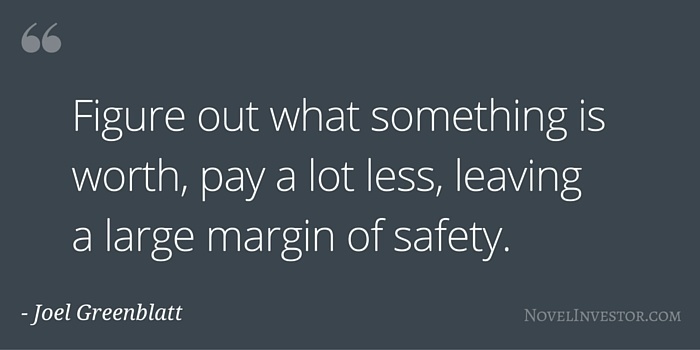 Earlier this year Wharton released a video where Howard Marks interviewed Joel Greenblatt. It was a short interview packed with wisdom from the two value investors.

Figure out what something is worth, pay a lot less, leaving a large margin of safety.

He repeated this definition several times during the interview. Most people never get past the first part, but he offers two guarantees to those that do the work.

So good work and the conviction to wait a few years is required. This is why most people fail before they get started. Bad behavior creeps in. They expect too much, too soon, and quit before they get rewarded. The hardest thing about investing is the waiting. A temperament to do nothing is the most overlooked quality in investing.

Yet, Greenblatt’s students regularly tell him – but it was easier to make money when you started then it is today. He has two responses to this.

People who get very good at analyzing businesses with special situations make a lot of money. Because of that, they get too big to play in that obscure area of the market, making room for new investors.

His second response is toward technology and why value investing still works in an “efficient market”:

That’s my way of saying people are still crazy. And that’s really an unfair thing to say because the S&P 500 is an average of 500 stocks. There’s huge dispersion going on within that average between stocks that are in favor, that people love emotionally, and stocks that people hate. So it’s really much worse than what I just described. There’s a huge dichotomy between things people like, people don’t, things that are out of favor…All this noise is going on within that average. That average is smoothing things.

The S&P 500 offers a nice measure of “the market”. But we can’t forget it’s only a small subset of the total market and mostly representative of large-cap stocks. Being too reliant on the bigger picture means you overlook everything not included in the index and miss what’s really going on in the market.

Investing seems as though it’s harder today than the past, but investing was never easy. Investor behavior is the same as it ever was. If anything, technology has only made it easier to add a new layer of complexity to strategies and it definitely compounds the short-term mindset driving the market. If anything, that combination should make it easier for the most disciplined investors.

Marks added this gem at the end to put it all into perspective: