In the last post, I mentioned that China’s stock market is in freefall since about the middle of June and how it would be a great case study in investor behavior.

My lack of elaboration caused some confusion around the statement and the chart. So I thought I’d clear one thing up – the MSCI China Index is very different from China’s stock market.

Most foreign investors (that’d be us) don’t have access to A-shares, so they own H-shares instead. There’s a big discrepancy in price between A-shares and H-shares. And not every A-share stock has a similar H-share for foreigners to buy. The foreign investors (still us) can buy H-shares directly, or buy a China fund like the MSCI China ETF, or get some exposure through an emerging market index fund. I can’t comment on what actively managed emerging market funds are doing because I don’t know.

(There are ways to own A-shares, but I won’t get into it here because I wouldn’t own any myself until information from China became more transparent. It’s hard to trust info from a government set on controlling every aspect of a person’s life, while also attempting to project a certain image to the outside world.)

It’s way more confusing than it needs to be. What matters is most of us are on the outside looking in. Unless you live in China, then…

The chart below probably does a better job showing the difference. I stuck the Shanghai Composite Index (the China A-shares) against the MSCI China ETF. 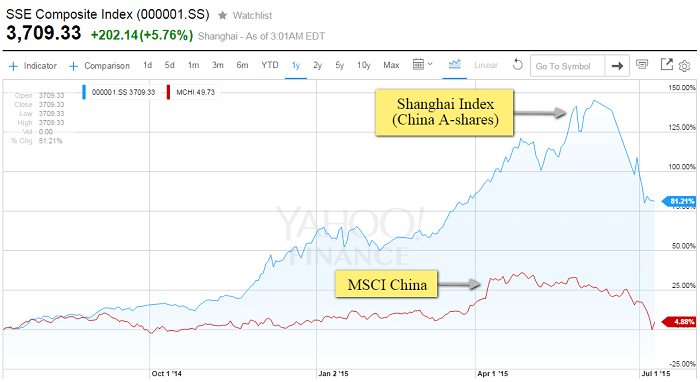 As you can see, the MSCI China ETF never came close to replicating the rise and fall of the Shanghai market. So the average foreign investor (still us) missed it.

To stop the slide, the Chinese government became even more involved in a situation it had a big hand in creating. It literally encouraged people to buy stocks on margin.

So Chinese investors borrowed against their house, their businesses, their existing shares, and any other assets they could leverage, to buy stocks they thought could never fall because the government said so. Oops!

I guess the government wants to send the message of a strong market (in this case, strong means higher, not more efficient, more open, transparent…you get the picture…things that would lead one to believe market prices aren’t controlled by an invisible hand).

It will be interesting to see how things unfold from here. Will the new government manipulation end the slide or just postpone the inevitable?

How will Chinese investors react to the government manipulation? Remember, most are first-time investors. How will they view stocks after this? How will the crash affect China’s economy? How much will excessive debt compound the issue? What’s the risk of any potential spillover into other markets?

I don’t have the answers, but  I do know that once the dust settles there will be an opportunity for the braver souls out there.