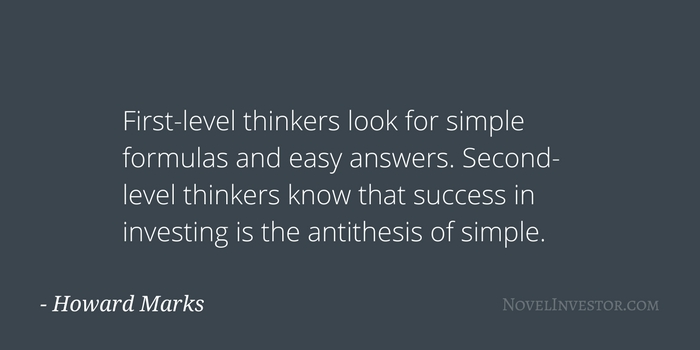 It turns out none of those are easy.

A lot of investors try to outwork the next person without realizing that all the other next persons are trying to do the same thing.

And the trouble with being smarter than everyone else is that nobody looks or feels smarter until after the fact. The smartest investors tend to do things that nobody else is doing and often seem wrong at the time.

But then there’s behaving better. That seems easy enough to do but we all believe we behave perfectly fine all the time.

So a real smart investor will see those possibilities and come to one of two conclusions: they can’t do it, so they won’t try or they realize that the only way they will ever do any of those three things is if they, think, work, or behave differently than everyone else.

Howard Marks explains it this way in The Most Important Thing:

Remember, your goal in investing isn’t to earn average returns; you want to do better than average. Thus, your thinking has to be better than that of others — both more powerful and at a higher level. Since other investors may be smart, well-informed and highly computerized, you must find an edge they don’t have. You must think of something they haven’t thought of, see things they miss or bring insight they don’t possess. You have to react differently and behave differently. In short, being right may be a necessary condition for investment success, but it won’t be sufficient. You must be more right than others…which by definition means your thinking has to be different.

Howard Marks refers to this process as second-level thinking.

First-level thinking is coming to a simple obvious conclusion and making a bet on it. But if something seems simple or obvious, there’s a good chance everyone else is thinking the same thing. And if they’re thinking the same obvious thing, then it’s probably already priced in.

So doing the easy obvious thing is bound to get average results or worse because there is no effort to doing it.

First-level thinkers think the same way other first level thinkers do about the same things, and they generally reach the same conclusions. By definition, this can’t be the route to superior results. All investors can’t beat the market since, collectively, they are the market.

To get better than average results, you have to invest differently than the market. To do that you have to think different. So rather than jump to the obvious or simple conclusion you need to dive deeper:

First-level thinking is simplistic and superficial, and just about everyone can do it (a bad sign for anything involving an attempt at superiority). All the first-level thinker needs is an opinion about the future, as in “the outlook for a company is favorable, meaning the stock will go up.”

But thinking differently from the crowd isn’t enough and won’t guarantee immediate results. Anyone can take a contrarian view for the sake of it. So you also have to be right.

And when you’re money is on the line, you have to have the courage to go against what everyone else is doing. Most investors follow the crowd, not because it’s right or leads to better results, but because it’s comfortable.

As if that’s not enough, you also need the patience and discipline to stick with it because first-level thinkers can continue to drive momentum in the short term like in the late stage of a cycle (second level thinking is what protects you from its ultimate end).

Ultimately, it’s the abundance of first-level thinking that creates the opportunities for second level thinkers to succeed. In other words, being a second-level thinker is hard but beating the market was never an easy or obvious thing.