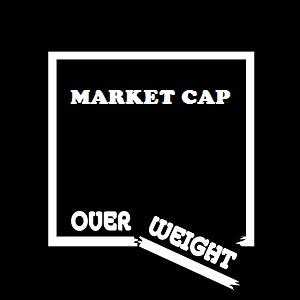 Index funds are the most popular investment product used today. Most of those funds are based on a market cap weighted index.

But do you know how market cap weighting works? Or how it affects your portfolio? It pays to know how the index works, so you understand how the fund and your money is invested.

An index is used to measure the performance of financial markets. A market cap weighted index uses, you guesses it, market cap to build the index. Market cap is the stock price multiplied by the total number of outstanding shares.

Usually, liquidity or float (the number of publicly owned shares available for trading) is a factor in the formula. The reason is simple. You’ll often find a company or person owns a large amount of the outstanding shares with no plan to sell. For example, company XYZ has 20 million outstanding shares but another company owns 5 million (25% of the shares). In this case, a float adjusted, cap weighted index will only use 75% of XYZ’s market cap to figure out its place in the index.

With the rise of index funds, the popular stock market indexes, like the S&P 500, now use a float adjusted weighting as well. This benefits the funds by taking into consideration the number of publicly available shares, since index funds buy shares of stock in the index.

Large cap companies have a bigger impact on any economy. As a market measuring stick, a market cap weighting does a good job of measuring the stock market as it pertains to the economy.

However, as an investment model for index funds there’s only a few benefits. A market cap weighted index fund is a very tax efficient, low-cost, and simple way for anyone to invest. Enough studies show how well index funds do against their managed counterparts to make it a worthy investment strategy.

Just because market cap is the most popular weighting and it’s easy to implement doesn’t make it perfect.

At some point in the last century, the financial industry turned a measuring stick into a hammer (or an investment style).

A big problem with a market cap weighted index is Apple or what Apple accomplished in becoming the largest market cap stock in such a small amount of time and how index funds played a role in it.

I don’t know anyone who used an S&P 500 index fund as a way to own Apple. Yet, by owning the index you’re vested in Apple and its performance along with 499 other companies that were hand-picked by the Standard & Poor’s index builders.

This poses several problems. First, there’s a heavy reliance on large cap stock performance. This risk needs to be considered for diversification and allocation reasons. Otherwise your portfolio will have a bias toward large cap stocks that you might not want.

Secondly, these index funds end up owning more of the expensive stocks. And sadly the index funds are forced to buy more as a stock’s price rises. The index fund will always have the biggest position (the most money) in a stock at its peak. It’s the ultimate no-no in buying high. Of course, it will have the smallest position when a stock troughs. As an investment strategy, its backwards.

Lastly, style bias can lead to inefficient markets. Index investing as an investment style works, but only because other investors choose not to use it. Anytime one style dominates, the markets outperform based on that style.

In this case, if index investments become the predominant style, as prices rise, funds buy more shares causing prices to rise further. And the opposite happens when prices fall. This style bias leads to bubbles and busts. So a healthy mix of investment styles is needed to keep the markets as equalized and rational as possible.