Warren Buffett released his “ground rules” for the Buffett Partnership in the 1962 Annual Letter. Between his rules and the rest of the letter, you get an idea of how and why he builds a conservative portfolio.

Throughout the earlier letters, Buffett repeats several themes, which he wraps up into seven rules:

Most of it straight forward and involves tempering the partners expectations from one year to the next. It’s not till the last point that Buffett lays out his investment philosophy. He  expands on it later in the letter.

Our avenue of investment breaks down into three categories. These categories have different behavior characteristics, and the way our money is divided among them will have an important effect on our results, relative to the Dow, in any given year. The actual percentage division among categories is to some degree planned, but to a great extent, accidental, based upon availability factors.

The three categories, as Buffett refers to them, are “Generals”, “Workouts”, and “Control Situations”. The Generals are the typical undervalued stocks:

Sometimes these work out very fast; many times they take years. It is difficult at the time of purchase to know any compelling reason why they should appreciate in price. However, because of this lack of glamour or anything pending which might create immediate favorable market action, they are available at very cheap prices. A lot of value can be obtained for the price paid. This substantial excess of value creates a comfortable margin of safety in each transaction. Combining this margin of safety with a diversity of commitments creates a most attractive package of safety and appreciation potential. We do not go into these generals with the idea of getting the last nickel, but are usually quite content selling out at some intermediate level between our purchase price and what we regard as fair value to a private owner.

The generals tend to behave market-wise very much in sympathy with the Dow. Just because something is cheap does not mean it is not going to go down.

Workouts are special situations, where price action is tied to a corporate event with an end date like a merger or spinoff.

These are securities whose financial results depend on corporate action rather supply and demand factors created by buyers and sellers of securities. In other words, they are securities with a timetable where we can predict, within reasonable error limits, when we will get how much and what might upset the apple cart.

This category will produce reasonably stable earnings from year to year, to a large extent irrespective of the course of the Dow. Obviously, if we operate throughout a year with a large portion of our portfolio in work-outs, we will look extremely good if it turns out to be a declining year for the Dow, or quite bad if it is a strongly advancing year.

Control Situations are the activist portion of the portfolio. The partnership attempts to build a controlling interest in a company to “unlock value” in some way. Dempster Mills is one example, which Buffett explains in detail in the letter.

With the three categories, he’s building a portfolio that moves at the whim of market behavior in the one area but bucks that trend in the latter two. He’s trying to build a conservative portfolio that avoids the excesses – extreme optimism and pessimism – of the market, especially the during market drawdowns.

He explains to the partners that he’s not trying to beat or even keep pace with the market on the year’s it moves higher. His goal is to lose less than the market during the year’s it falls.

I feel the most objective test as to just how conservative our manner of investing is arises through evaluation of performance in down markets. Preferably these should involve a substantial decline in the Dow. Our performance in the rather mild declines of 1957 and 1960 would confirm my hypothesis that we invest in an extremely conservative manner.

However, compared to more conventional (often termed conservative which is not synonymous) methods of common stock investing, it would appear that our method involved considerably less risk. Our advantage over the Dow was all achieved when the market was going down; we lost a bit of this edge on the way up.

As stated above, a declining Dow gives us our chance to shine and pile up the percentage advantages which, coupled with only an average performance during advancing markets, will give us quite satisfactory long-term results. Our target is an approximately 1/2% decline for each 1% decline in the Dow and if achieved, means we have a considerably more conservative vehicle for investment in stocks than practically any alternative. 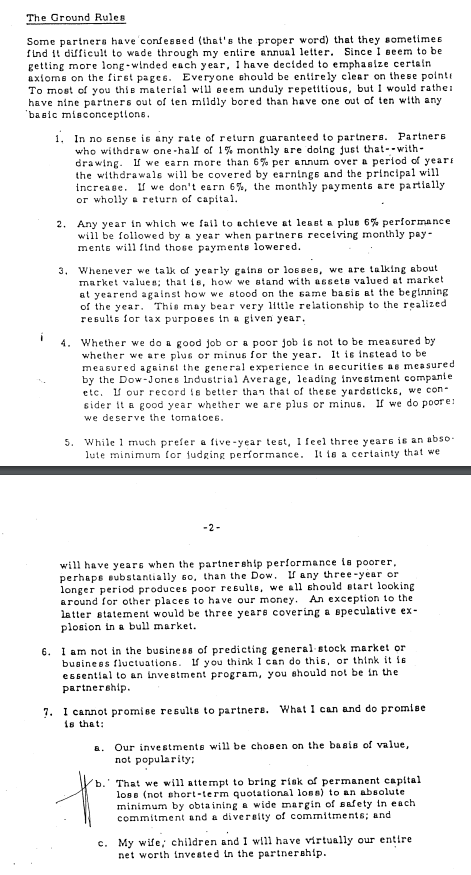