Fred C. Kelly wrote an almost weekly column for Barron’s from December 1936 to June 1937. It was well-timed.

His column began near the tail end of a four-year bull market. The stock market bottomed in June 1932  — June 8th for the Dow at 41.2. Then it took off. The next four years saw the Dow rise 337% off the bottom.

However, 1937 would end that run with a 33% loss on the Dow. The Dow hit a high for the year on March 10th, proceeded to decline 15% over the next three months, then almost recovered completely. The ’37 crash hit two months after his column ended.

The lesson from studying market history is how little human nature changes. In fact, the lesson goes beyond that. Human nature plays an important role in driving markets to extremes.

Throughout the years, a number of people have tried to explain the interaction between investors’ behavior and the stock market. John Maynard Keynes likened the stock market to a beauty contest.

Professional investment may be likened to those newspaper competitions in which the competitors have to pick out the six prettiest faces from a hundred photographs, the prize being awarded to the competitor whose choice most nearly corresponds to the average preferences of the competitors as a whole; so that each competitor has to pick, not those faces which he himself finds prettiest, but those which he thinks likeliest to catch the fancy of the other competitors, all of whom are looking at the problem from the same point of view… We have reached the third degree where we devote our intelligences to anticipating what average opinion expects the average opinion to be.

In other words, investors have skipped the part of picking the best stock or fund for the long run. And instead, they try to anticipate which stock or fund other investors think will go up the most. END_OF_DOCUMENT_TOKEN_TO_BE_REPLACED

Bernard Baruch was known as the Lone Wolf of Wall Street, but he wore many hats. He was a speculator, an investor, a deal maker, a philanthropist, and an advisor to Presidents.

Baruch was born in Camden, South Carolina in 1870. The family moved to New York when he was 10. He got his first job on Wall Street in 1889 as a runner for $3 a week. It was there he first learned the art of arbitrage, reorganizations, and speculation.

He became a partner at A.A. Housman & Company at age 25, playing speculator and dealmaker for the firm. In one instance, he put arbitrage skills to work after learning of the potential end to the Spanish-American War. It was July 3rd. The New York exchange was closed on the 4th. So he bought stocks on the London exchange, expecting to sell them for a big profit when the exchange opened on the 5th. When the New York exchange opened on the 5th, his stock prices soared.

In another instance, he played dealmaker in a tobacco merger. He convinced Liggett & Myers to merge with Union Tobacco. At the last minute, a third company, Continental Tobacco, joined to create the monopoly known as The American Tobacco Company. Baruch earned a cool $150,000 for his effort.

By 33, he was a millionaire, bought a seat on the exchange, and set out on his own. END_OF_DOCUMENT_TOKEN_TO_BE_REPLACED

Investing can be simply defined as using money to make more money. How does one go about doing that? That’s where things can get overly complicated but the answer is simpler than you might think.

One person who distilled it wonderfully was Bill Miller. He offered a simple three-part answer:

When I first got into the business, I met Bill Ruane, Warren Buffett’s friend who ran Ruane Cunniff. Somebody asked him, “If you could give some advice about investing, what would it be?” And as Ruane related this story to me, he said, “I told the guy that if he reads Security Analysis and The Intelligent Investor and then reads all of Warren Buffett’s annual reports, and if he really understands what they were saying, he will know everything there is to know about investing.”

I thought about that advice for a number of years and agree with it, and then I heard this comment from two-time World Series of Poker champion Puggy Pearson: “Ain’t but three things to gambling. Number one: knowing the 60/40 end of a proposition. Number two: money management. And number three: knowing yourself.” This advice is succinct and encompasses all you really need to know about how to approach investing.

Here’s why: Knowing the 60/40 end of a proposition means knowing when you invest that the odds are in your favor. However you compute the odds, the odds have to be in your favor.
END_OF_DOCUMENT_TOKEN_TO_BE_REPLACED

Not long after telegraph and telephone lines were strung across the U.S, the wireless telegraph was invented by Guglielmo Marconi. His two-way radio broadcast transmitted telegraph signals long distances without any wires.

Marconi recognized the disruptive potential of his new invention and sought out investors in England to fund his new venture. The Marconi Wireless Telegraph Company was formed in 1897.

A similar story played out across the pond in Chicago. Lee De Forest, fresh out of Yale, took a job as a laboratory assistant. De Forest joined Edwin Smythe and Clarence Freeman to help build their own wireless apparatus. In 1901, they successfully sent a communication to a yacht five miles off the coast of Lake Michigan.

The three quickly realized the business potential. All they needed was capital. So De Forest traveled to New York to find investors and form a company. He found Henry Snyder, a promoter, who scrounged up $3,000 from five investors and incorporated the Wireless Telegraph Company of America in New Jersey.

But it was Abraham White who changed the fate of their company forever. White was a self-made speculator who once made $100,000 on a 44-cent gamble. White immediately saw the potential of wireless technology to enrich himself and cooked up a scheme to make it possible: END_OF_DOCUMENT_TOKEN_TO_BE_REPLACED 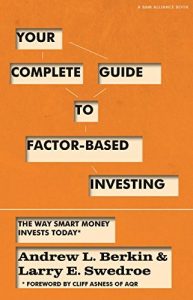 The guide digs into the growing factor zoo to find the factor premia worth considering in a portfolio. The authors introduce five criteria any factor should meet, discuss the seven factors that qualify, and why other factors fall short of consideration.