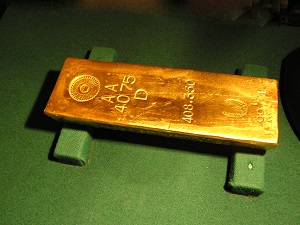 Now that the tax deadline is over we can get on with everything else. Enough has happened in the last two weeks to make big waves in the markets. Earnings season, Japan, and falling gold prices all made news. Two matter, one does not, unless you owned gold.

Japan kicked things off with an aggressive monetary policy announcement. It will follow the Feds playbook to jump-start its economy.  If you didn’t know, the Bank of Japan has fought deflation for the past two decades and failed.

It’s latest attempt to jump-start inflation will throw 60 to 70 trillion yen at the problem. If it works, it would push more money out of savings accounts and into stocks. Sound familiar?

We can add one more country to the list of long-term debt buyers trying to boost an economy.

Is the great gold trade finally over? After peaking last October, gold has been on a slow fall ever since. Until its 10% drop yesterday.

Many speculate it started with Cyprus needing to sell its gold to cover the bailout. The perception is that Spain, Portugal, and other Euro countries might have to do the same. I’d argue it has more to do with margin calls than over-supply issues.

When you borrow money to buy something that is falling in value, you better have the capital to back it up. If not, you have to sell to cover the difference. When everyone else starts selling too, it only compounds the issue. And you see something like this:

Investors need to ask if this has anything to do with stocks. I don’t see it. It should put to rest the overblown fear of hyperinflation, recession, and other worries. That’s it. It’s also not saying the market will only go higher. Just to clear that up.

So why was gold so high to begin with? For some reason, people put a higher value on gold when fear enters the equation. The theory is that gold acts as an insurance policy protecting you from an end of the world economic collapse. Whether it does or not, I won’t know till it happens.

I do know gold makes for a good trade in the right environment, but I don’t believe it should be a staple in any long-term portfolio. It might be a good hedge for inflation, but so are stocks and real estate. So take gold with a grain of salt. Unless you believe it has some superior use over cash producing assets.

Hopefully this puts an end to the goldbug fear mongering, the hyperinflation talk, and those annoying TV commercials professing the advantages to buying gold. It was a great smokescreen from the reality of an improving economy. Now that we can see clearly, let’s focus on what matters.

Which brings us to earnings.

The E part of the P/E ratio is what matters. For stocks to go higher, one thing needs to happen. Earnings must increase.

It’s easy to confuse, over complicate, and over think this whole process with economic data. It’s nice to look at and speculate where the economy is headed. But great data doesn’t guarantee a stock price will go up. Instead, the data offers opportunities to buy and sell when investors overreact to it.

As I mentioned last month, we need to see earnings numbers above expectations, increasing revenues, dividend raises, and higher projections through year-end for this to continue. That’s just something to watch as we move deeper into earnings season.

A few things to keep in mind when/if the stock market corrects:

You don’t need individual stocks to take advantage of this. Sector specific ETFs are another great option. As are cap specific ETFs. Look for sectors where multiple companies are growing earnings.

With yesterdays drop, we can expect more volatility this earnings season. Which means more opportunities. Just be patient.

It’s Not Summer Yet

This year is just getting started. We haven’t hit the warm months yet in the northern hemisphere. High unemployment and heat don’t go well together. The only thing that has changed from last year – people are more unhappy about things not changing. We can expect another round of protests in Europe which will affect market volatility.