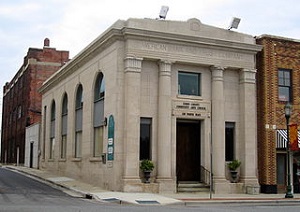 The banking sector was hit hard by low interest rates. Now that rates are rising, it stands to reason both national and regional banks should do better with higher interest rates. An easy way to play this is through a bank ETF.

There’s a big difference between the two types of banks. Big banks have the added risks from their investment bank, proprietary trading desk, and global reach. Not to mention big banks are still dealing with a higher legal, regulatory, and consumer scrutiny since the crisis.

However, regional banks follow a more traditional banking model, where banks make money on the spread between interest paid on deposits and the interest charged on loans. When interest rates rise, the spread widens and profits increase.

The goal is to find sectors that benefit from higher interest rates while still offering some protection if interests rates drop. A regional bank ETF should offer you some short-term protection from the volatility and still offer a nice return several years down the road.

The short-term case is fairly simple and leads into the long-term case. Banks benefit from an improving economy, lower unemployment, end to QE, and higher interest rates. If we’re heading in this direction, banks in general and regional banks in particular will continue to do well.

With interest rates gone wild, the typical “safe” investments got hit hard. The utilities, telecoms, high yield dividend stocks, and bonds were the biggest losers and it happened over a very short amount of time. These are certainly unusual times and I have no idea where interest rates will be next week or next month. In the short-term, that’s a problem and adds to the risk of most stocks.

If rates drop again, the impact would be offset by a rise in value of the banks existing loan book. Any short-term drop would be a buying opportunity for a long-term investment.

It’s been years since we’ve seen normal interest rates. The eventual end of QE will bring that back. Right now the Fed hints at a rough one year timeline, but any changes in that direction will impact the rates on loans that banks charge.

Mortgage rates tend to follow the 10 year Treasury rates which sat around 3 – 4% back when the federal funds rate was dropped to zero. That would put mortgage rates in the 5 – 6% range. That’s a far cry from the 3.5% being offered a few months ago and offers a nice spread for higher bank profits.

None of this takes into account rising home prices and larger loans. Or that higher interest rates will allow banks to take more risk and lend to the lower credit score crowd. This will increase loan delinquency rates but would easily be offset by the higher interest charges.

There is the small business case, too. An improving economy fairs well for small business growth and higher business loan activity. Since regional banks have a better picture of their local businesses and economy, it should allow them to work much more efficiently.

Lastly, as bank profits rise, you can expect to see consolidation through M&A at the regional level, especially in the small cap banks.

Over the long-term, the regional bank risk is tied to the economy and interest rates. Any significant downturn would have a big impact on bank profits and lending would slow. On the opposite side, a spike in interest rates could halt home purchases, impact home prices, slow mortgage lending, and slow the economy.

The downside is limited. Regional banks have run efficiently on low rates, low lending, and a slow economy since the crisis. If it continues the regional banks are already positioned to deal with it.

The easiest way to play this is through the regional bank ETFs. The three available are:

If you’re one to search for individual stocks, understand that not all regions are performing the same. You’ll need to do some extra work finding individual bank stocks. These banks are focused in small areas of the country. Just like harder hit areas take longer to recover, local banks in those areas will too. Make sure you understand the local economy of a bank before investing.