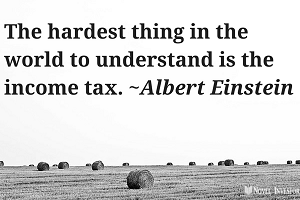 There are only a few ways to get out of paying taxes. Tax evasion is the wrong way to do it. Tax avoidance is the other, legal way around it. My point is, taxes are a cost you can manage and tax harvesting is a piece of a tax efficient investment plan.

Most of us have fairly consistent income. It’s usually investment income that changes from year to year. The tax code is set up in a way that investment income is taxed at different rates. When you invest through a taxable account you have to plan for income tax on interest earned, along with capital gains tax, and dividend tax.

The tax code lets you use or harvest investment losses to offset capital gains. And a forward thinking investor might sell a gain today to avoid higher taxes in the future.

We sell investments for a number of reasons. Anytime you sell one for a loss, the IRS views it as a realized loss and the amount lost can be used to offset gains now or in the future. Tax loss harvesting involves taking advantage of those capital losses to offset capital gains and lower your tax bill.

Say you had a $5,000 capital gain this year. The idea of paying a 15% capital gains tax might hurt a little. A short-term gain would hurt even more since its taxed at your income tax rate. If it came as a surprise at tax time, it could be painful.

This isn’t the only way to avoid taxes.

When it’s possible, you’re almost always better off paying taxes in the future than paying taxes now. This is especially true with capital gains – you’re only taxed when you sell. There are rare occasions where taking a tax hit now is better. It requires some foresight, though.

Tax gain harvesting only works if you know you’re future taxes and you can actually save money in the process. For instance, if your income over the next few years pushes you into a higher capital gains rate, you might have an opportunity to save on taxes. This works if you had plans to sell an investment during that time. You’d pay taxes on the lower rates now, reinvest that money at a higher cost basis, and avoid the higher rates later.

Here’s how it works. Say you get a huge raise, but it won’t start till next year. The raise moves you into a higher tax bracket, like from 15% to 25%, which raises your long term capital gains rate from 0% to 15%. Selling some investments for a gain this year let’s you take advantage of the 0% capital gains rate, instead of getting hit with a possible 15% or higher tax rate in the future.

Taxes Change All The Time

Our elected officials love to fiddle with the tax code. Sometimes it’s good news. Other times it’s bad. Politics aside, nobody knows what the tax rates will be in the future. Any changes could help or hurt your tax plan. You’re at an advantage just by doing regular portfolio checkups throughout the year. You can take it a step further if you:

For many investors, tax harvesting is a year end event. Ideally, it should be done throughout the year. A great starting point is when you make regular portfolio changes – like when you rebalance and adjust your allocation – consider the tax consequences of those actions. You might be able to save yourself some money now or later.

What you shouldn’t do is constantly sell losing investments every year just to lower your taxes. It sounds like a great idea but if you do that, you’ll quickly run out of losing investments to sell, and be stuck with a bigger capital gains tax in the future. Rather, you should take advantage of tax harvesting opportunities when you can but you have to consider how selling an investment might impact your taxes, investment plan, and financial goals down the road.