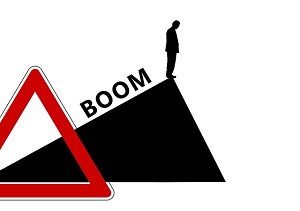 Let’s face it, there are many mistakes investors make. Trying to single one out as the biggest, or worst mistake ever is tough. I’ve made my share over the years, including this one. What’s worse, this has played a consistent role in past bubbles and busts.

It goes by many names: chasing returns or rearview mirror investing. The biggest mistake investors make is the belief that what happened in the past will continue into the future. It’s an affliction many of us deal with all the time. But there is good news. It’s curable.

This happens with stocks, bonds, mutual funds, and index funds. The hottest of each gets the most attention and the money follows. These are often misconstrued as safe investments, can’t miss opportunities that inevitably fail.

Many thought Apple could only go up. What they failed to account for is the ability to innovate on a high level isn’t easy. To do it in a way that continuously generates a high degree of sales is nearly impossible. Expecting Apple to do it year in and year out, indefinitely is outrageous. Yet Apple shares were bought up at $600 and even $700 a share thinking it would.

Berkshire Hathaway is another example. Buffett is at the peak of his fame and one of the best investors ever. Yet, even he admits that the size of Berkshire limits his ability to outperform the S&P 500 going forward. Despite that revelation, some Berkshire investors still believe he can do it.

Even index fund are susceptible too. It’s easy to get comfortable with double digit S&P 500 returns (19% average annual return the past three years). Yet the S&P historically averages just under 10% per year. We go wrong thinking it will continue to outperform indefinitely.

We’re only a few years removed from the financial crisis. How many people still say real estate is a can’t lose investment? Or dotcom stocks? All share signs of greed and fearlessness, that the good times would last forever. In reality, those continually high returns just overpriced houses and dotcom stocks until the greater fool was left holding the bag.

Understand that historical averages exist for a reason. Those great performances are ultimately dragged down by bad years. It’s the basics of mean reversion, asset prices will always revert to its average eventually. Ignoring this fact gets investors in trouble.

Rather than chasing the next hot stock or fund fad, build an investment plan around your goals and stay focused on it. Stick with it over the long-term. A solid, diversified portfolio can weather the down years and still leave enough room to grow when those great performances show up.

Know that straying from your plan is self-defeating. Chasing past performance will get you in trouble. Investing solely on it will ultimately lead to losses. And if you’re always on the lookout for the next big thing, there’s a good chance you’ll find out you’re the last one in line.