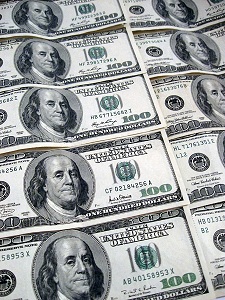 The Fed announcement of QE3 was the big news last week.  Despite my misgivings and distaste for more easing, it’s here, it’s going to happen, so let’s make some money from it.  Or more importantly, not lose any.

The good news is we have history on our side.  A little research will show us what happened with the last two QE events.  Though I don’t see it having nearly the same effect this time around.  There is too much uncertainty going into the end of the year.

The Fed, for the first time, announced an open-ended easing program entirely based on improving the unemployment rate.

The Committee will closely monitor incoming information on economic and financial developments in coming months. If the outlook for the labor market does not improve substantially, the Committee will continue its purchases of agency mortgage-backed securities, undertake additional asset purchases, and employ its other policy tools as appropriate until such improvement is achieved in a context of price stability. – Federal Reserve FOMC Statement

The Fed hopes that lower mortgage rates will drive people to buy new homes.  In theory, this should lower the housing supply and push new construction and job growth.  The question is, will it work?

It’s obvious that easing has a positive affect on the stock market.  Which has consistently been followed by a correction once QE ended.  But if you’re jumping in the market now hoping for a payday, you’re misguided.  Each successive QE had less of an effect on prices than the prior QE.  The uncertainly tied into next year, doesn’t bode well this time around.

If QE3 wasn’t enough, there are three big events that will impact the markets before year-end:

Earnings season isn’t actually different but it will give us a good picture how well businesses are doing, their expectation are for year-end, and plans for next year.  Mostly good news will drive the stocks higher to year-end.  If history is any indication, we’ll see it continue through to at least mid March.  But expect a growing concern over tax uncertainty with each earnings release.

The elections are priority number one in Washington.  If the fiscal cliff is dealt with before the elections, I’ll be shocked.  The economy can’t handle the planned 2013 tax hike.  A last-minute rush to extend the tax cuts one more year won’t be a surprise.  If it’s tied to a jobs bill, even better.  Until then, caution is the parent of safety.

Where Should The Money Go

The question everyone always wants to know…where should I put my money?  Because it’s just that easy to conjure up guaranteed places to make money.  It’s not.  So lets focus on asset allocation.  And the question is not stocks or bonds.

Bonds are off the table.  The interest payments on Treasuries don’t cover inflation.  Prior easing has driven fixed income investors toward corporate and junk bonds for their interest payment fix.  This just adds more credit risk for a minimal reward.  Add to that high interest rate risk and bonds should be sold, if you follow the buy low, sell high mandate.  When rates rise, and they will, bonds prices will fall.  A better allocation just might be stocks and cash.

Why cash?  A good money market account is safe for the next few months.  Until we know what is happening with the fiscal cliff everything is in limbo.  And the markets hate uncertainty.  If you remember how the market reacted to the debt ceiling crisis last year, expect much of the same.  Once its finalized you can readjust your allocation accordingly.  But for now, there is no point in taking on extra risk for the next three months.

If that doesn’t drive you to be conservative, then focus on the inflation and fear hedges.  That means commodities and oil and natural gas stocks specifically.  Precious metals will be the fear trade leading up to the end of the year.

The best choice might be real estate.  Just become a new homeowner or landlord.  It’s exactly what the Fed wants.  If you plan on buying a house in the next few years, move up the deadline.  Home prices are still undervalued, mortgage rates are low and real estate is a great inflation hedge.

Economic growth is the only thing that will sustain a higher stock market.  The Fed is attempting to jump-start that growth but its been entirely one-sided in that effort.  The economy will be stuck in neutral until the government gets it’s act together with a sound fiscal policy promoting job growth.  But the elections hold more importance for the politicians.  So once their jobs are secure, they’ll get around to everything else.