Investing in wonderful companies popularized by Warren Buffett is becoming more and more common. Successfully doing it is less common because they’re still hard to find without hindsight.

Henrik Bessembinder followed up his research on the greatest companies to see what characteristics made them great. He looked at the best 200 companies in two buckets — by greatest wealth creation and highest excess return by decade.

The top 200 companies in each bucket had a few characteristics that stood out during their best decade of performance:

It’s a safe bet that high organic asset growth is the primary characteristic of great companies. But growth in the company’s cash balance was the most significant. Which is not surprising.

A true compounder is financially strong. It makes cash hand over fist. Which gives good management optionality. It can be reinvested to grow the business, paid out in a steadily increasing dividend, used to buy back stock, pay down debt, or set aside for tough times. All five options show up in the tables below.

The other safe bet is multiple expansion. Investors paid a much higher Price/Book at the end of the decade than at the beginning. The multiple was two to four times higher, on average, compared to the prior decade.

The combination of those two — a growing company and investors that will pay more and more money for said growth — produces unbelievable returns. 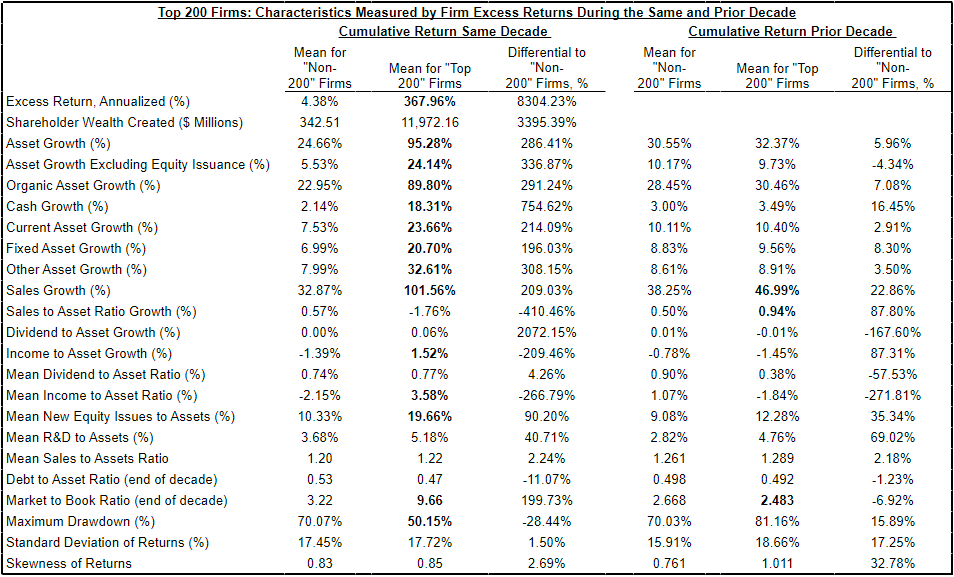 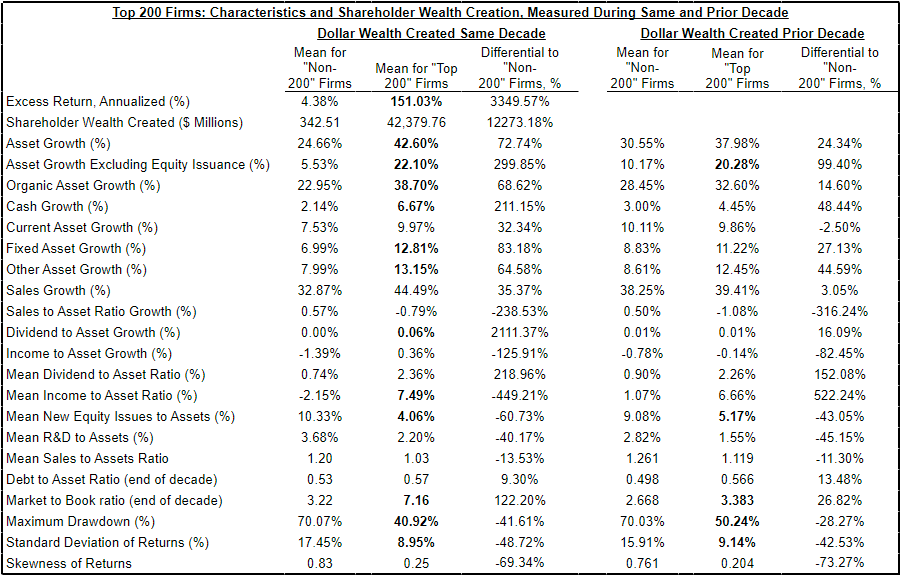 So how do we find these great companies in advance? Bessembinder looked at the decade before the companies greatest decade to see if any metrics stood out (see the tables above).

Unfortunately, it was less than helpful. Companies with high excess returns are extremely difficult to predict in advance. High wealth creators were only slightly easier to find.

As might be expected, identifying characteristics that can be measured objectively and that successfully predict extreme stock market outcomes is challenging. Nevertheless, the data indicate that some statistically significant patterns existed during the decades from 1960 to 2019. Firms with the highest decade-horizon stock market returns tended to be younger, had larger drawdowns the prior decade, and had higher prior-decade R&D spending as compared to more typical firms…

While the observable characteristics studied here had statistically significant forecast power for extreme positive and negative decade-horizon returns between 1960 and 2019, more than 98% of the variation in outcomes remains unexplained. The key open question is what portion of the unexplained variation can in principle be predicted by other (perhaps subjectively assessed) characteristics such as management quality, and what portion is purely random and therefore will prove impossible to predict?

There is something going on in these companies that can’t be easily identified with simple quantitative metrics. Maybe it’s the management’s skills. Maybe it’s luck. Maybe it’s some competitive advantage that’s not easily measured in advance. The point is you have to look outside the numbers to find it.

But if you can find them — small or mature — the returns are phenomenal.