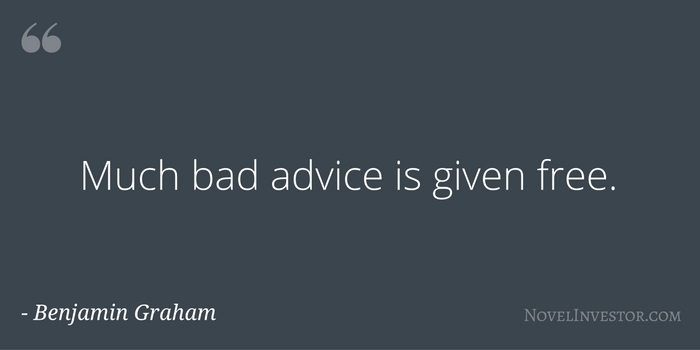 This is part three of The Intelligent Investor series. I’ve been sharing some of the timeless wisdom from Graham’s groundbreaking book as a way to put my notes to good use. The first part covered the first four chapters of the book and part two covered the next four chapters. This post continues in kind.

In chapter nine, Graham explains why the defensive investor should use mutual funds. I’m sure if he could update the book today, he’d offer a similar view on index funds. Chapter ten digs into the role financial advisors play, along with warnings on the role pseudo “advisers” play as well. Finally, chapters eleven and twelve delve into Graham’s thoughts on security analysis generally and how to deal with earnings per share specifically.

The decision investors must make is not between using funds or picking stocks but between this.

The real choice of the average individual has not been between constructing and acquiring a well-balanced common-stock portfolio or doing the same thing, a bit more expensively, by buying into the funds. More likely his choice has been between succumbing to the wiles of the doorbell-ringing mutual-fund salesman on the one hand, as against succumbing to the even wilier and much more dangerous peddlers of second- and third-rate new offerings. We cannot help thinking, too, that the average individual who opens a brokerage account with the idea of making conservative common-stock investments is likely to find himself beset by untoward influences in the direction of speculation and speculative losses; these temptations should be much less for the mutual-fund buyer.

Even Graham warned decades ago not to expect more than average results from large mutual funds.

We do not think the mutual fund industry can be critcized for doing no better than the market as a whole. Their managers and their professional competitors administer so large a portion of all marketable common stocks that what happens to the market as a whole must necessarily happen (approximately) to the sum of their funds.

All financial experience up to now indicates that large funds, soundly managed, can produce at best only slightly better than average results over the years. If they are unsoundly managed they can produce spectatular, but largely illusory, profits for a while, followed inevitably by calamitous losses.

Graham relays the moral of the late 1920s and 1960s (it repeated again in the late 1990s, 40 years later) and why the cycle of excessive greed and optimism in the markets will continue.

Bright, energetic people – usually quite young – have promised to perform miracles with “other people’s money” since time immemorial. They have usually been able to do it for a while – or at least to appear to have done it – and they have inevitably brought losses to their public in the end. About a half century ago the “miracles” were often accompanied by flagrant manipulation, misleading corporate reporting, capitalization structures, and other semi fraudulent financial practices. All this brought on an elaborate system of financial controls by the SEC, as well as a cautious attitude toward common stocks on the part of the general public. The operations of the new “money managers” in 1965-1969 came a little more than one full generation after the shenanigans of 1926-1929. The specific malpractices banned after the 1929 were no longer resorted to – they involved the risk of jail sentences. But in many corners of Wall Street they were replaced by newer gadgets and gimmicks that produced very similar results in the end. Outright manipulation of prices disappeared, but there were many other methods of drawing the gullible public’s attention to the profit possibilities in “hot” issues. Blocks of “letter stocks” could be bought well below the quoted market price, subject to undisclosed restrictions on their sale; they could immediately be carried in the reports at their full market value, showing a lovely and illusory profit. And so on. It is amazing how, in a completely different atmosphere of regulation and prohibitions, Wall Street was able to duplicate so much of the excesses and errors of the 1920s.

No doubt there will be new regulations and new prohibitions. The specific abuses of the late 1960s will be fairly adequately banned from Wall Street. But it is probably too much to expect that the urge to speculate will ever disappear, or that the exploitation of that urge can ever be abolished. It is part of the armament of the intelligent investor to know about these “Extraordinary Popular Delusions,” and to keep as far away from them as possible.

The role of a financial advisor is not to beat the market. It’s to do this.

He will use his superior training and experience to protect his clients against mistakes and to make sure that they obtain the results to which their money is entitled. It is when the investor demands more than an average return on his money, or when his adviser undertakes to do better for him, that the question arises whether more is being asked or promised than is likely to be delivered.

Free financial advice is worth about as much as it costs but probably less.

Most security buyers obtain advice without paying for it specifically. It stands to reason, therefore, that in the majority of cases they are not entitled to and should not expect better than average results.

Much bad advice is given free.

Graham offers a biased warning on why financial firms make stock market forecasts. (One alternative reason is the similar demand for opinions that confirm investor’s decisions.)

In our view – perhaps a prejudiced one – this segment of their work has no real significance except for the light it throws on human nature in the securities markets. Nearly everyone interested in common stocks wants to be told by someone else what he thinks the market is going to do. The demand being there, it must be supplied.

The use of complex formulas to value so-called growth stocks brings a large margin for error. The more you estimate the future, the wider that margin grows. Graham points this out and offers his simple formula with an addendum of a margin of safety. He adds that even with a simple formula, projections are not guarantees and prices don’t always cooperate.

However, we must point out a troublesome paradox here, which is that the mathematical valuations have become most prevalent precisely in those areas where one might consider them least reliable. For the more dependent the valuation becomes on anticipations of the future – and the less it is tied to a figure demonstrated by past performance – the more vulnerable it becomes to possible miscalculation and serious error. A large part of future projections which differ markedly from past performance – except perhaps in the growth rate itself. Thus it may be said that security analysts today find themselves compelled to become most mathematical and “scientific” in the very situations which lend themselves least auspiciously to exact treatment.

What the valuer actually does in these cases is to introduce a margin of safety into his calculations – somewhat as an engineer does in his specifications for a structure. On this basis the purchases would realize his assigned objective even if the growth rate actually realized proved substantially less than that projected in the formula. Of course, then, if that rate were actually realized the investor would be sure to enjoy a handsome additional return. There is really no way of valuing a high-growth company, in which the analyst can make realistic assumptions of both the proper multiplier for the current earnings and the expectable multiplier for the future earnings.

Let the reader not be misled into thinking that such projections have any high degree of reliability, or conversely, that future prices can be counted on to behave accordingly as the prophecies are realized, surpassed, or disappointed.

Only a few analysts are exceptional enough to reliably estimate future earnings (to those Graham recommends Common Stocks and Uncommon Profits in a footnote). Put it another way, it’s just as hard for professionals to predict the future, as it is for everyone else.

Ideally, perhaps, the security analyst should pick out the three or four companies whose future he thinks he knows the best, and concentrate his own and his clients’ interest on what he forecasts for them. Unfortunately, it appears to be almost impossible to distinguish between those individual forecasts which can be relied upon and those which are subject to a large chance of error. At bottom, this is the reason for the wide diversification practiced by the investment funds. For it is undoubtedly better to concentrate on one stock that you know is going to prove highly profitable, rather than dilute your results to a mediocre figure, merely for diversification’s sake. But this is not done, because it cannot be done dependably. The prevalence of wide diversification is in itself pragmatic repudiation of the fetish of “selectivity,” to which Wall Street constantly pays lips service.

No one really knows anything about what will happen in the distant future, but analysts and investors have strong views on the subject just the same.

Finally, Graham offers his view on using a qualitative versus a quantitative approach and what the investor should accept in return.

There are hazards connected with investment conclusions derived chiefly from such glimpses into the future, and not supported by presently demonstrable value. Yet there are perhaps equal hazards in sticking closely to the limits of value set by sober calculations resting on actual results. The investor cannot have it both ways. He can be imaginative and play for the big profits that are the reward for vision proved sound by the event; but then he must run a substantial risk of major or minor miscalculation. Or he can be conservative, and refuse to pay more than a minor premium for possibilities as yet unproved; but in that case he must be prepared for the later contemplation of golden opportunities foregone.

It stands to reason that great companies have good management and because of this investors sometimes mistakenly use that as another reason to slap a higher multiple on the stock. The market knows the management is good and it’s already reflected in the price. Instead, investors should look for new management, who’s ability is more likely to be discounted by the market.

The management factor is most useful, we think, in those cases in which a recent change has taken place that has not yet had the time to show its significance in the actual figures.

The first is: Don’t take a single year’s earnings seriously. The second is: If you do pay attention to short-term earnings, look for booby traps in the per-share figures.

This “mean figure” was useful for ironing out the frequent ups and downs of the business cycle, and it was thought to give a better idea of the company’s earning power than the results of the latest year alone.

If such figures are used in conjunction with ratings for growth and stability of earnings during the same period, they could give a really informing picture of the company’s past performance.