Optimism has a funny way of feeding off itself sometimes, bleeding into enthusiasm and excess. You’ve seen this story before with the internet boom and the housing bubble.

But before that, it led to the rise of the 1920s, where people like John J. Raskob fueled the easy money market that “Everybody Ought to be Rich”. Raskob’s bold claim in the August 1929 issue of Ladies’ Home Journal was typical for the time:

Suppose a man marries at the age of twenty-three and begins a regular saving of fifteen dollars a month – and almost anyone who is employed can do that if he tries. If he invests in good common stocks and allows the dividends and rights to accumulate, he will at the end of twenty years have at least eighty thousand dollars and an income from investments of around four hundred dollars a month. He will be rich. And because anyone can do that I am firm in my belief that anyone not only can be rich but ought to be rich.  – John J. Raskob

The Roaring 20s ushered in a new economic prosperity that would last. Or so people thought.

Raskob’s idea was simple. Systematically invest $15/mo. into stocks of good companies. At the end of 20 years, you could live off the $80,000 nest egg that he promised.

A month after his interview, on September 3rd, the market peaked at Dow 381 and October 29th the market crashed. The Dow wouldn’t see 381 again until 1954.

I ran the numbers to see what would happen if someone jumped on the bandwagon, invested $15 on the first of every month starting in August 1929 until the end of 1949. Instead of finding “good companies”, I settled for investing in the Dow (but also ran the numbers for the S&P 500 along with 60/40 split with 10 yr Treasuries). 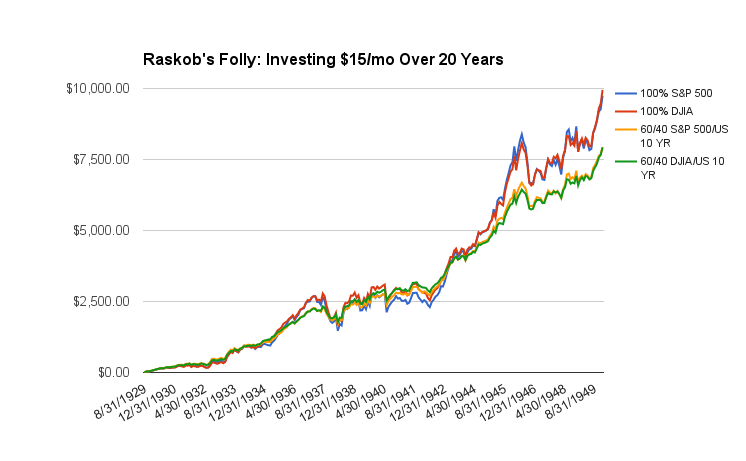 The S&P 500 and the Dow produced fairly similar results. The $15/mo. fell far short of Raskob’s expectations, but it shows he wasn’t entirely wrong. Putting money away every month was probably the best idea for the time since it performed better thanks to the market crash.

So a savvy investor with a secure job, disposable income, trust in the financial system, and an iron stomach could have done just fine.

Of course, for the average person, this was literally impossible.

If the aftermath of the ’29 Crash didn’t scare investors away, the Great Depression did. If they weren’t unemployed, their pay was being cut. Few people trusted their local bank. Why would they trust Wall Street? The average person wasn’t saving or investing. They were trying to survive. (The assumption of frictionless investing – no cost or taxes – covers the rest).

But since we’re dealing in hypotheticals, I thought I’d reach a bit further to see if any other investment or strategy got closer to Raskob’s $80,000 target. 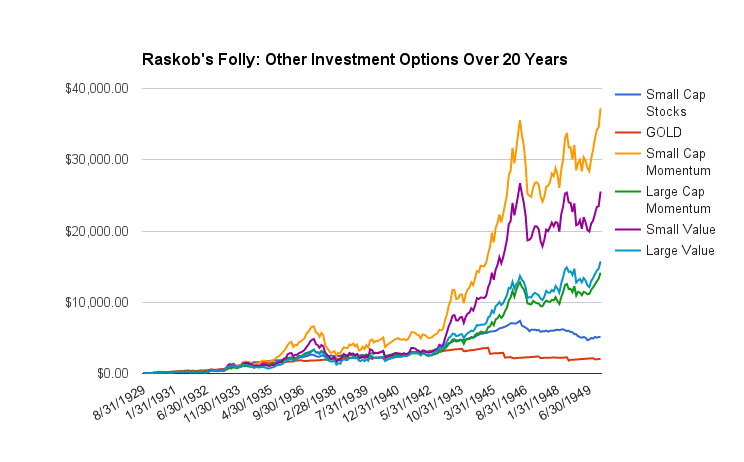 Everything fell short by more than half (I actually ran the scenario for more options, but left out the middling performers).

The benefit of hindsight makes this a fun exercise, but that’s it. Costs, taxes, and the law (you couldn’t own gold after 1933) make it impossible or would severely drag down real results further (accuracy of the data from that far back is another issue to consider).

Besides, it’s unlikely the average person suffered through the crash of ’29, the volatility of the 1930s, and the Great Depression and came out unscathed. It’s more likely they never got started. Even though stocks were the best-performing asset over that time, they were also the most hated, which explains a lot.

Excessive optimism causes people to ignore the risk of being wrong. Raskob’s folly was an extremely enthusiastic view of the future, but his call to average into the market was solid advice because averaging into a depressed market can actually help performance. Hated assets eventually perform well enough to become loved again. And as tough as it might be, saving more money and staying the course probably offers the best protection in case optimism fails you.