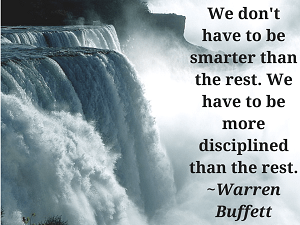 The S&P has gone on a nine year stretch without a loss and its had periods of multiple losses in a row. In fact, half of the losses were involved in multi-year losing streaks.

The infrequency of losing years doesn’t make it easy on investors. It allows you to get comfortable, too comfortable sometimes, or comfortable enough to forget about what the last loss did to your psyche and your savings.

Of course, what you do during the losing years, how you handle losing, broadly impacts your long term returns. Selling drags your returns down. Your other two choices – do nothing or buy – are much harder but can improve your results dramatically compared to selling. Those choices get harder still when dealing with multiple losing years.

The tables below break down the multi-year losing periods and the subsequent year’s returns. Keep in mind that several of these periods, especially the two year periods, fit into larger periods of losses.

These periods are only half of the S&P 500’s total number of losing years. The other half only lasted one year. You’ve probably noticed that some, especially the two year periods, are pieces of a longer losing streak.

Essentially, by selling during any of these periods, you miss out on the following year’s returns. In a few cases you missed further losses. By selling, you have to correctly guess when to buy back into the market or miss the opportunity once the losing streak ends. In other cases, you miss a bigger rebound immediately.

There are no hard and fast rules about how long (or how far) the market will fall before it reverts. Eventually, it will happen. That said, the odds a rebound happens, naturally increases as the market falls further. Whether you’re prepared for it is the question. The hard part is putting up with further losses while you wait. That will never change.

Thankfully, the S&P hasn’t offered up many losing streaks:

Investors are protective by nature. The natural response is to sell. It’s not easy to watch hard earned money disappear even if its only on paper and temporary. The longer a losing streak drags on, the harder it is to stay invested.

If you’re equipped to handle big losses, and further losses, you’re ahead of most investors. But that is a big IF! The difference between saying it and doing it is what separates value investors from everyone else. What makes it more impressive is the ability to do it when consecutive losses don’t happen often. That an investor can stomach further losses, while putting more money into a falling market, is what truly sets them apart.