There are a lot of ways to fail at investing. Owning the worst-performing companies is a big one. The solution is a matter of avoidance. Is there a way to find the worst performers in advance?

Henrik Bessimbinder, while researching the greatest companies, looked at the worst-performing companies by decades. He broke the worst performers into two categories: by returns and total shareholder wealth lost.

The top 200 companies in each category had a few characteristics that stood out during their worst-performing decade:

It’s exactly what you expect to find in a company that performed poorly over 10 years. Slowing growth, falling profitability, declining dividend payouts, burning through cash faster than the business can replenish it, diluting shareholders with new share issuance, rising debt, and most important a high valuation that was cut by more than half in over a decade.

One big difference between the two categories stands out. The higher volatility in the smaller companies suggests that the market had a tougher time deciding on the companies ultimate demise. The stock had periods of high positive returns mixed into its worst-performing decade.

On the other hand, the worst wealth destroyers reads more like a mature profitable company that watched its competition slowly grind away at its market share. But that’s not necessarily the end of the story. Sometimes companies stumble. If management can fix the problem, it can reverse the trend. A company that trades at a low multiple, that then surprises on the upside, can produce outstanding returns. 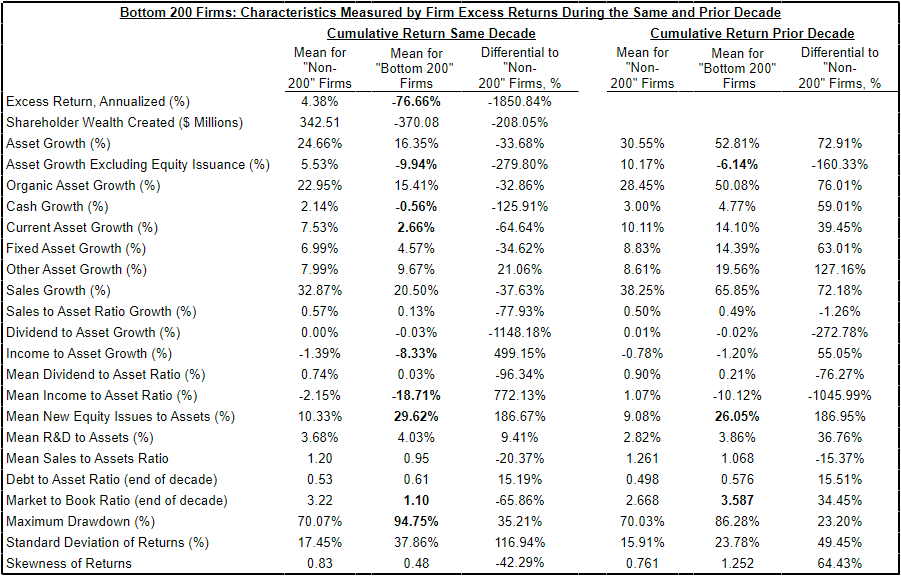 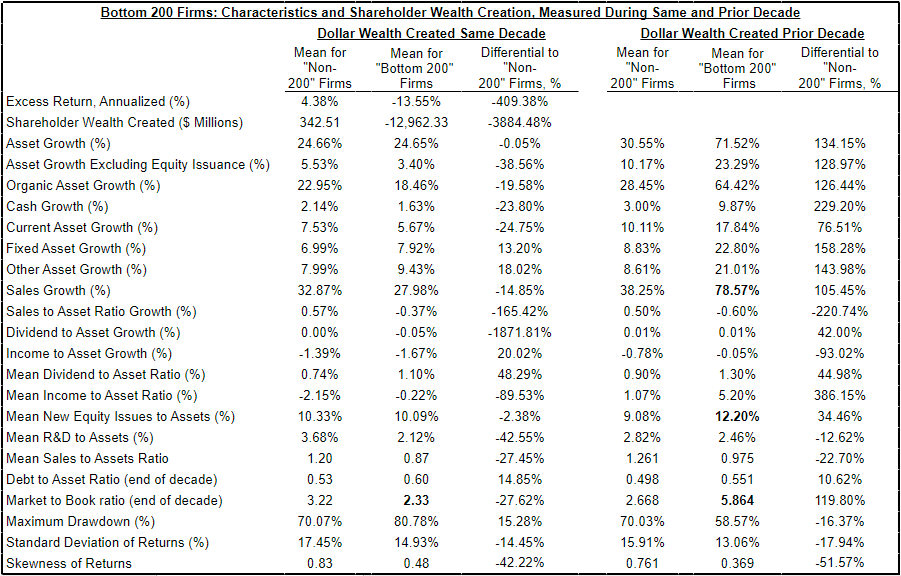 The real question is how do we avoid these losers in advance. Bessimbinder checked into that too. He looked at the decade prior to the worst decade and found a few helpful hints that stood out.

Higher leverage, falling income, high shareholder dilution, and a high valuation rounded out the significant metrics of the worst performers in the prior decade.

In terms of worst wealth destroyers, the companies were older, more profitable, and had high fixed asset growth in the prior decade. Which is not a sign of poor performance to come. But it does explain the two important pieces which stood out above the rest:

That a company’s worst decade likely followed its best decade is important. But the overvaluation only tells part of the story.

The market was enthusiastic about the “growth story.” So it paid a high multiple for that continued success. It just failed to anticipate the downside.

It’s not that high multiple stocks automatically perform poorly. It’s that something has to happen — mismanagement, stiffer competition, lower growth, etc. — to eventually make the market re-valuate the company in a big way.

So a company with a high multiple combined with increasing leverage, shareholder dilution, slowing growth, declining profits, and/or any other worsening metric listed above has a higher probability of horrible performance. Those are companies worth avoiding.