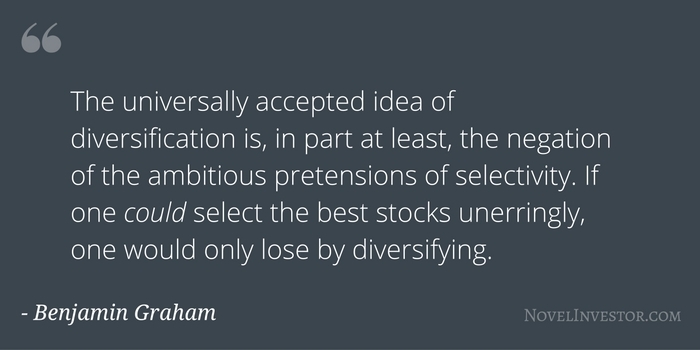 This is part four of The Intelligent Investor series. I’ve been going through my notes from the book – four chapters at a time – and sharing some of Ben Graham’s timeless wisdom. You can find the other parts here: Part 1, Part 2, and Part 3.

This post covers chapters thirteen through sixteen, which offered a case study on four listed companies, went more in-depth on stock selection for the defensive and enterprising investors, and, finally, Graham’s views on convertible issues.

On picking value versus growth:

There was no reason to expect that in any short period of time the low-multiplier duo would outperform the high-multipliers. The latter were well thought of in the market and thus had a considerable degree of momentum behind them, which might continue for an indefinite period.

This is reminds me of Howard Marks’ quote:

Overpriced is not the same as going down tomorrow.

Paraphrasing that – undervalued is not the same as going up tomorrow. Put another way, momentum can drive high priced stocks higher and low priced stocks lower for a lot longer than investors expect.

Graham recommended indexing before index funds were a thing:

The defensive investors should stick with high-quality bonds and a diversified basket of leading stocks. For the basket of stocks, there are two options – an index-type basket or a quantitatively chosen basket.

In setting up this diversified list he has a choice of two approaches, the DJIA-type of portfolio and the quantitatively-tested portfolio. In the first he acquires a true cross-section sample of the leading issues, which will include both some favored growth companies, whose shares sell at especially high multipliers, and also less popular and less expensive enterprises. This could be done, most simply, perhaps, by buying the same amount of all thirty of the issues in the Dow-Jones Industrial Average (DJIA).

His second choice would be to apply a set of standards to each purchase to make sure that he obtains (1) a minimum of quality in the past performance and current financial position of the company, and also (2) a minimum of quantity in terms of earnings and assets per dollar of price.

On how easy it is to beat the market average:

We would be less than frank, as the euphemism goes, if we did not at the outset express grave reservations on this score. At first blush the case for successful selection appears self-evident. To get average results – e.g., equivalent to the performance of the DJIA – should require no special ability of any kind. All that is needed is a portfolio identical with, or similar to, those thirty prominent issues. Surely, then, by the exercise of even a moderate degree of skill – derived from study, experience, and native ability – it should be possible to obtain substantially better results than the DJIA.

Yet there is considerable and impressive evidence to the effect that this is very hard to do, even though the qualifications of those trying it are of the highest. The evidence lies in the record of the numerous investment companies, or “funds,” which have been in operation for many years.

Taken as a whole, however, the all-common-stock funds failed over a long span of years to earn quite as good a return as was shown on the Standard & Poor’s 500-stock averages or the market as a whole.

For a variety of reasons, most members of the public who put their money in common stocks of their own choice fail do nearly as well. But to the objective observer the failure of the funds to better the performance of a broad average is a pretty conclusive indication that such an achievement, instead of being easy, is in fact extremely difficult.

While not impossible, the cyclicality of businesses and markets offers the possibility of better than average returns:

Extremely few companies have been able to show a high rate of uninterrupted growth for long periods. Remarkably few, also, of the larger companies suffer ultimate extinction. For most, their history is one of vicissitudes, of ups and downs, of change in their relative standing. In some the variations “from rags to riches and back” have been repeated on almost a cyclical basis – the phrase used to be a standard one applied to the steel industry – for others spectacular changes have been identified with deterioration or improvement of management.

Readers of this book, however intelligent and knowing, could scarcely expect to do a better job of portfolio selection than the top analysts of the country. But if it is true that a fairly large segment of the stock market is often discriminated against or entirely neglected in the standard analytical selections, then the intelligent investor may be in a position to profit from the resultant undervaluations.

But to do so he must follow specific methods that are not generally accepted in Wall Street, since those that are so accepted do not seem to produce the results that everyone would like to achieve. It would be rather strange if – with all the brains at work professionally in the stock market – there could be approaches which are both sound and relatively unpopular. Yet our own career and reputation have been based on this unlikely fact.

The enterprising investor may confine his choice to industries and companies about which he holds an optimistic view, but we counsel strongly against paying a high price for a stock (in relation to earnings and assets) because of such enthusiasm. If he followed our philosophy in this field he would more likely be the buyer of important cyclical enterprises – such as steel shares perhaps – when the current situation is unfavorable, the near-term prospects are poor, and the low price fully reflects the current pessimism.

Being different (and behaving better) than everyone else offers a chance for better than average results. Graham’s view of turning an eye toward the unpopular is one way to be different. This combined with a margin of safety helps to protect yourself when you’re wrong.

Successful investing is a matter of exclusion:

Our emphasis in selection has been chiefly on exclusions – advising on the one hand against all issues of recognizably poor quality, and on the other against highest-quality issues if their price is so high as to involve a considerable speculative risk.

On a qualitative versus quantitative approach:

This is not so surprising as it may at first appear. The underlying reason is that the current price of each prominent stock pretty well reflects the salient factors in its financial record plus the general opinion as to its future prospects. Hence the view of any analyst that one stock is a better buy than the rest must arise to a great extent from his personal partialities and expectations, or from the placing of his emphasis on one set of factors rather than on another in his work of evaluation. If all analysts were agreed that one particular stock was better than the rest, that issue would quickly advance to a price which would offset all of its previous advantages.

Our statement that the current price reflects both known facts and future expectations was intended to emphasize the double basis for market valuations. Corresponding with these two kinds of value elements are two different approaches to security analysis. To be sure, every competent analyst looks forward to the future rather than backward to the past, and he realizes that his work will prove good or bad depending on what will happen and not on what has happened. Nevertheless, the future itself can be approached in two different ways, which may be called the way of prediction (or projection) and the way of protection.

Those who emphasize prediction will endeavor to anticipate fairly accurately just what the company will accomplish in future years – in particular whether earnings will show pronounced and persistent growth. These conclusions may be based on a very careful study of such factors as supply and demand in the industry – or volume, price, and costs – or else they may be derived from a rather naive projection of the line of past growth into the future. If these authorities are convinced that the fairly long-term prospects are unusually favorable, they will almost always recommend the stock for purchase without paying too much regard to the level at which it is selling…

By contrast, those who emphasize protection are always especially concerned with the price of the issue at the time of study. Their main effort is to assure themselves of a substantial margin of indicated present value above the market price – which margin could absorb unfavorable developments in the future. Generally speaking, therefore, it is not so necessary for them to be enthusiastic over the company’s long-term prospects as it is to be reasonably confident that the enterprise will get along.

The first, or predictive, approach could also be called the qualitative approach, since it emphasizes prospects, management, and other nonmeasurables, albeit highly important, factors that go under the heading of quality. The second, or protective, approach may be called the quantitative or statistical approach, since it emphasizes the measurable relationships between selling price and earnings, assets, dividends, and so forth. Incidentally, the quantitative method is really an extension – into the field of common stocks – of the viewpoint that security analysis has found to be sound in the selection of bonds and preferred stocks.

In our own attitude and professional work we were always committed to the quantitative approach. From the first we wanted to make sure that we were getting ample value for our money in concrete, demonstrable terms. We were not willing to accept the prospects and promises of the future as compensation for a lack of sufficient value in hand. This has by no means been the standard viewpoint among investment authorities; in fact, the majority would probably subscribe to the view that prospects, quality of management, other intangibles, and “the human factor” far outweigh the indications supplied by any study of the past record, balance sheet, and all the other cold figures.

Thus this matter of choosing the “best” stocks is at bottom a highly controversial one. Our advice to the defensive investor is that he let it alone. Let him emphasize diversification more than individual selection. Incidentally, the universally accepted idea of diversification is, in part at least, the negation of the ambitious pretensions of selectivity. If one could select the best stocks unerringly, one would only lose by diversifying.

On not selling to avoid taxes:

Alas! there will be capital-gains taxes to pay – which for the typical investor seems to be about the same as the Devil to pay. Our old ally, experience, tells us here that it is better to sell and pay the tax than to not sell and repent.

On projecting one company’s performance onto an entire industry:

It is usually unsound to make blanket recommendations of whole classes of securities, and there are equal objections to broad condemnation.

On why perfectly good companies sell below their true value:

How does it come about that well-established companies, whose brands are household names all over the country, could be valued at such low figures – at the same time when other concerns (with better earnings growth of course) were selling for billions of dollars in excess of what their balance sheet showed? To quote the “old days” once more, the idea of good will as an element of tangible value was usually associated with a “trade name.”…But now, if the “market doesn’t like a company,” not only renowned trade names but land, buildings, machinery, and what you will, can all count for nothing in its scales. Pascal said that “the heart has its reasons that the reason doesn’t understand.” For “heart” read “Wall Street.”