Every chart tells a story. Which story depends on what you choose to see. The asset class tables tell stories of best returns, worst returns, or a middle ground that avoids both. Maybe it’s the tale of mean reversion and infinite cycling of markets. Or randomness. Unpredictability. Irrationality.

I’ve explained it before here, here, and here. This time, I’ll hold off till the end because most people will see what they want to see and ignore the rest.

As usual, I’ll point out a few things I see in the tables, along with some other year-end data that was left out.

Before I begin, if you want to see a full-size table, click the image or the link below it. And if you want a copy of one of the tables below, you can get it here. Be aware it’s an image file. 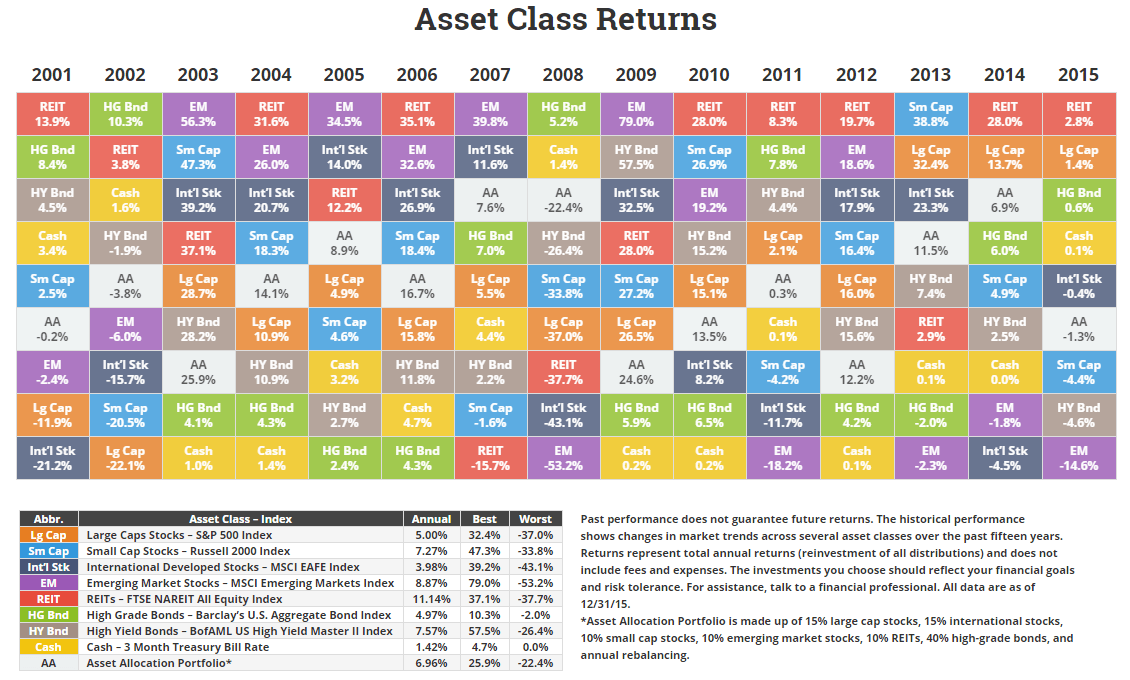 It was a lackluster year. For the most part, assets went nowhere in 2015. Emerging markets are the sole exception finishing the year with a double-digit loss.Emerging markets lost money four of the last five years, including losses three years in a row. A track record like that is a solid reason to dump an asset…or buy one. Depending on how you see things, emerging markets could be the best or worst investment going forward.

Emerging markets lost money four of the last five years, including losses three years in a row. A track record like that is a solid reason to dump an asset…or buy one. Depending on how you see things, emerging markets could be the best or worst investment going forward.

REITs are the best performer five of the last six years, the best annual returns over the last fifteen years, and finished positive seven years in a row. Dividends drove a lot of that performance. REIT dividend yields are half of what they were in 2001.

A diversified portfolio lost money for the first time since 2008, underperforming cash. The range of returns, from best to worst, was the smallest it’s been over the last fifteen years. It’s hard to complain about a 1% loss when the best performer in the portfolio earned 2.8%. I guarantee many will complain anyway because it didn’t live up to the last few years. 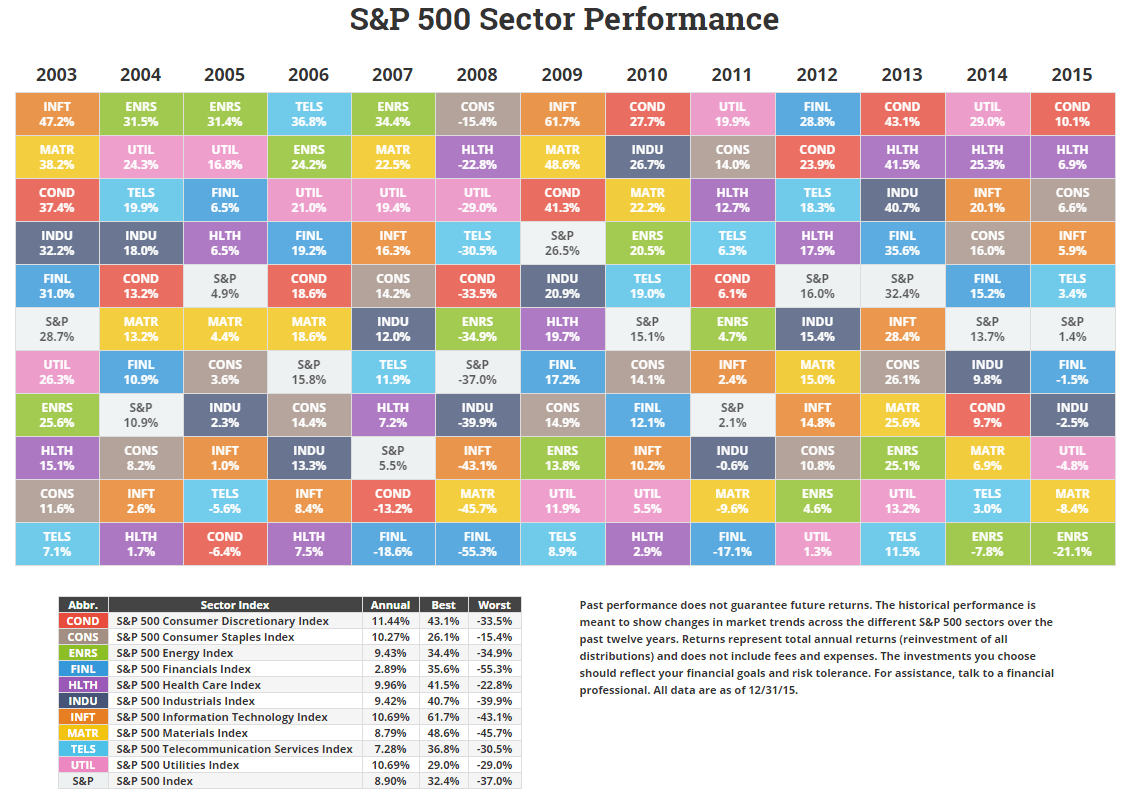 The S&P 500 is now positive for seven straight years, along with twelve of the last thirteen years. That has only happened twice before – an eight-year stretch from ’82 to ’89 and a nine-year run from ’91 to ’99. Back in 2008, how many people predicted a positive S&P 500 for seven years straight? My guess – nobody.

The S&P 500 sectors were split evenly last year with five winners and five losers. Those five winners haven’t seen a losing a year since 2008.

Collectively, the sectors have performed great since the crisis. Every sector was positive in four out of the last seven years. It could have been five, if it wasn’t for the energy sector’s 2014 loss. 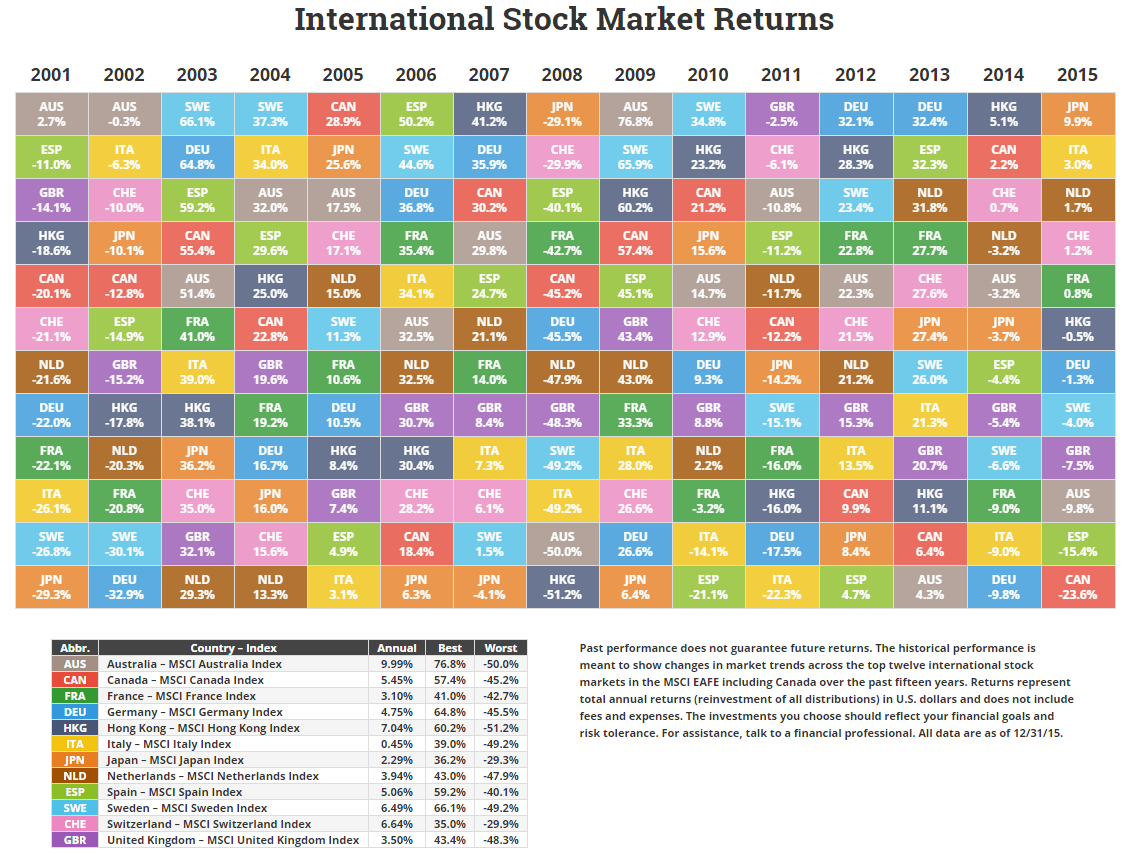 As a group, the developed markets aka MSCI EAFE basically broke even. For developed countries, Denmark actually had the best returns of 2015 – at 24%, while Canada was the worst.

Finland, Denmark, Belgium, and Switzerland each extended their gains to four years in a row, while Ireland hit its fifth. If you were ranking developed countries based on highest CAPE ratio, the U.S. would be #4. Only Denmark (#1), Ireland (#2), and Japan (#3) are higher.

As for consecutive losses, six developed countries – Germany, U.K., Spain, Australia, Sweden, and Norway – now have two losing years in a row (none have three). Of those six, Norway and Spain have the lowest CAPE ratio. 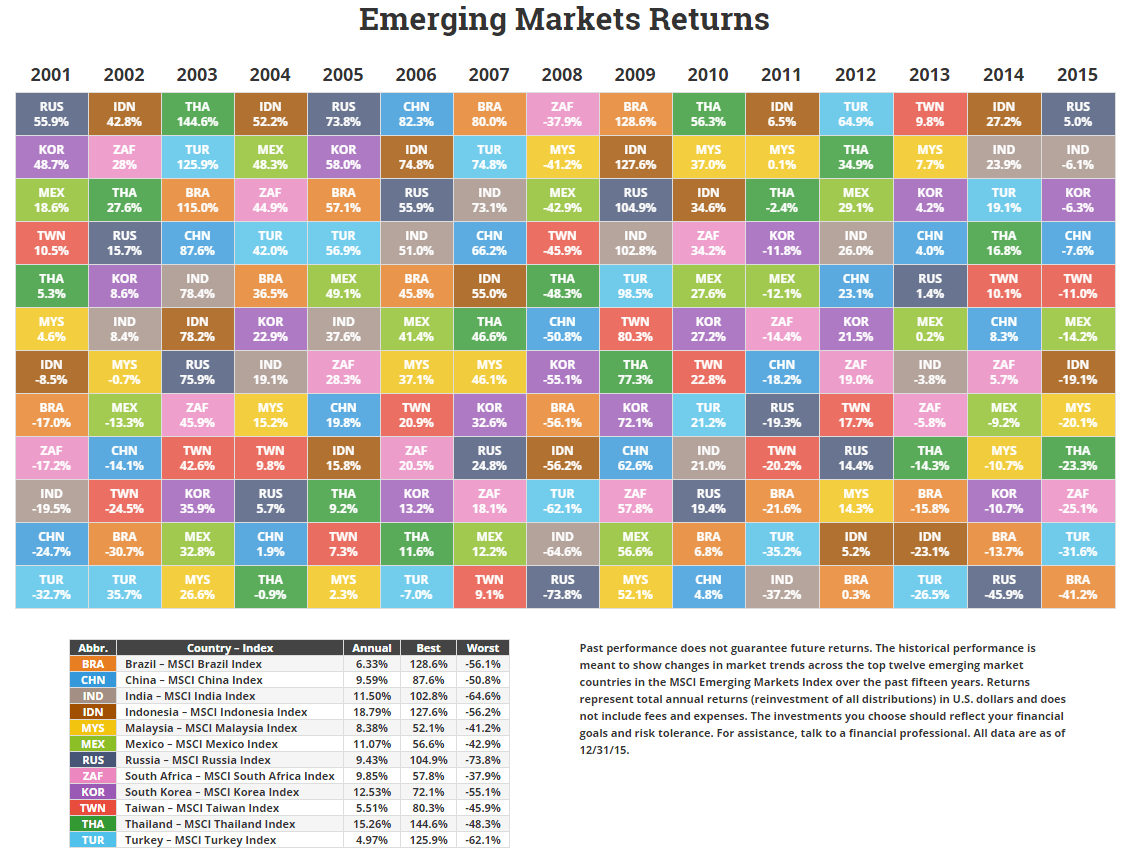 As I said at the top, emerging markets have seen the worst of it the past few years. The table only tells half the story.

Only two emerging market countries – Russia and Hungary – were positive for 2015, out of twenty-three in the MSCI EM index. And consecutive gains don’t exist.

Hungary had the best year at 36%. Greece was the worst with a 61% loss, following a 40% loss in 2014. Buying a Greece ETF to start 2015 was an expensive lesson. Markets that fall far can still fall a lot further.

With all that carnage, it’s no surprise that emerging markets have the lowest CAPE ratio and highest expected returns than any other asset class to start 2016.

If you shoot for the best performers every year, you risk ending up with the worst. While the worst performers, the hardest to buy into, can sometimes produce the best results…for those with patience and a high tolerance for pain. However, if you try to avoid the worst, you’ll likely miss out on the best, while ending up somewhere in the middle. And if you expect greatness every year, you’ll be disappointed often.  Just look at 2015.