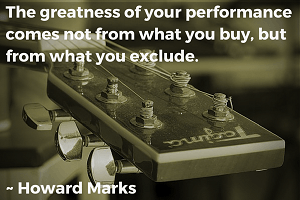 We love to make money, but we hate to lose money even more. The ultimate investing strategy is the one that never loses money. Except that strategy doesn’t exist. The next best option is to control your investment risk to avoid the biggest losses.

Lets imagine someone gifted enough to guess every losing year in the stock market. Of course, it’s more then just picking the losing years. They’d have put their money in cash for the losing years but be invested in the market for every other year too. They’d have to bat 1,000 and stick with it over time.

The chart below shows exactly what their performance would look like, minus the losses in blue.

Even then, it’s not perfect. This only considers year end results. They’d have to stay invested through any mid year corrections or crashes, like ’87 which ended the year positive despite the 23% crash on Oct. 19. In other words, the timing isn’t perfect but their behavior needs to be. Considering all the emotional second guessing, especially as their wealth grew, at what point does “playing it safe” become a thought?

Remember, they’re just indexing without the losses. They’d still miss out on other, better investment returns in most years. When does greed kick in because 14% returns aren’t enough anymore?

None of this should take away from the importance of avoiding losses. You have to expect some from time to time. But it’s the big losses that do the most damage to your money and mind. Big losses scare investors out of their investments. Then they stray further, taking more risks, to make up for the mistake. Your portfolio needs to be built in a way that keeps you invested during the worst of times.

What if you could avoid some of those worst times. As Howard Marks says, “If we avoid the losers, the winners will take care of themselves.”

Here’s what would happen if a simple index investor avoids the worst years with a 20% loss or worse.

Hindsight makes it easy to pick out the worst years. There were only six years with 20% losses or more. The investors still dealt with eighteen losing years but missing the six worst years created ten times more wealth.

Whether it’s a market wide loss or self inflicted loss from mistakes and bad behavior, the impact is the same. The point is to avoid digging yourself into a big hole you then have to climb out of.

When you stop trying to make a killing every year, to focus on controlling for the biggest risks, you end up performing better than average and better than most investors over time.

You can’t be all aboard the S&P express (or any investment) if you can’t handle the worst possible outcomes. For that, you need a plan. The first place to start is with a diversified allocation of stocks and bonds built so you can handle the worst days. You don’t want to be scared into making a mistake that creates a bigger loss later on.

The other option is a tactical allocation built around a set of rules that adjust the portfolio based on changes in risk, then automate it to avoid losses from self inflicted mistakes. With any plan, not sticking to it is the biggest risk.