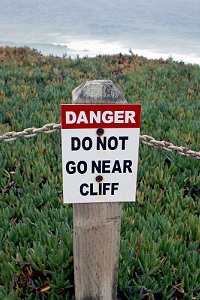 The markets came back to reality this week.  Many blamed it on the election results.  Despite your political leanings, there’s been this fiscal cliff to deal with all year.  And apparently Europe still has problems too.  The concern going forward lies with the possible effects of expiring tax cuts.  You can read all about the potential tax rate changes here.

This fiscal cliff, as it stands, leaves a big question mark on our economic future.  Actually, it’s pretty specific about what happens.  What throws a wrench into things is Congress and the President are finally addressing it now.  And the market, in its infinite wisdom, can’t survive long on predictions and hearsay.  The market needs facts.  And this fiscal cliff is a big steaming pile of uncertainty as it stands today.

The biggest concern is taxes and how much you’ll owe next year.  So I’ll clear it up now.  You will still pay taxes.  How much is the question.  So what exactly does the market and investors need to know?

The fiscal cliff currently stands to raise taxes across the board and enact forced budget and spending cuts by the government to reign in debt.  Overall it looks something like this:

That gets you an estimated total of $694 billion dollars in spending cuts and tax increases.  Since the professionals are comparing that number to GDP, it’s about 4% of current GDP.  Why is that important?  The theory is that all this money would otherwise be spent money, working in the economy.  So, if you take all that money out, the economy is worse off.  It’s not entirely true but I’ll play along.

Here’s the problem.  As it stands now, all of this is moot if Congress and the President come to some agreement before the end of the year.

Which can be broken down into three scenarios.  In the first scenario, the fiscal cliff happens.  Dividends, capital gains and income taxes increase as I described earlier.  Of course, that won’t make the electorate happy.  So the second scenario is another extension of the Bush tax cuts.  Or a third scenario is some combination of tax cuts with some spending cuts too.

Since both sides of the aisle aren’t on the same page, everything is up in the air.  The market is drowning in uncertainty.  And that’s why we had a sell off after the election.  Investors saw the S&P 500 up nicely for the year and took the opportunity to lock in capital gains now, while the tax is low.

But What About All That Debt

All these tax cuts don’t pay for themselves.  As we’ve found out over the past decade, tax cuts are great on our wallets but terrible on government deficits.  So at some point we’ll need to make up for it all.  Eventually, be it next year or four years from now, the tax code needs to change.

But it’s not as dire as everyone makes it out to be.  I don’t see a point for less debt.  Okay, maybe a little less debt.  The government is currently able to borrow money at rates below inflation.  While savers are getting gouged by pitifully low interest rates, borrowers are able to leverage cheaply.

In the case of the U.S. government, those rates are blue light special low and that’s with a less than perfect bond rating.  The low rates only slow the growth of U.S. debt.

If, it’s a big if, the government can get spending under control, a balanced budget stops the growth.  And inflation alone will slowly wipe out the debt.  Of course, savers would have to suck it up for years and accept long-term low rates.

Which brings us to the problem.  An austerity only plan ignores economic growth and puts us in a malaise for years.  We need a combination pro growth, responsible spending plan that works both sides of the fence.  Or as close to that as possible.

The real outcome is up to the politicians.  In the end, we’re stuck here waiting, again.  Hopefully we’ll have an answer before Christmas.

With all this fiscal cliff uncertainty, how can things go right.  Here’s what we do know:

After all of that, things will be okay.  The country is much stronger today.  The market will get the facts it needs.  I suspect it will be higher by the end of the year.  And sometime in the future, the market will be even higher, the economy stronger, unemployment lower, and we’ll all be wealthier for it.