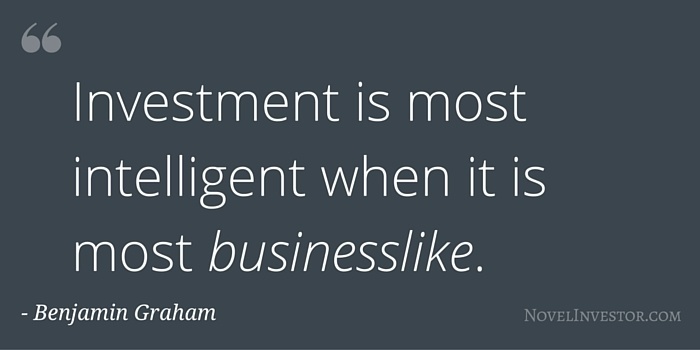 This is the fifth and final post to close out The Intelligent Investor series. I’ve been sharing some of Ben Graham’s timeless wisdom, four chapters at a time. You can find the other parts here: Part 1, Part 2, Part 3, and Part 4.

This post covers chapters seventeen to twenty. In chapter 17, Graham points out the lessons from four “extreme” cases that often get repeated in history. Then Graham compares sixteen recent stocks (recent for 1972) to show just how different one stock is from another. In Chapter 19, he takes a dig at management and offers his thoughts on dividend policy. He wraps up the book with a chapter on margin of safety – the most important concept of value investing – and finishes it off with his four principles.

On the inevitability of greed in markets:

The speculative public is incorrigible. In financial terms it cannot count beyond 3. It will buy anything, at any price, if there seems to be some “action” in progress. It will fall for any company identified with “franchising,” computers, electronics, science, technology, or what have you, when the particular fashion is raging. Our readers, sensible investors all, are of course above such foolishness.

On how market attitude impacts price:

For the most part the companies with better growth records and higher profitability have sold at higher multipliers or current earnings – which is logical enough in general. Whether the specific differentials in price/earnings ratios are “justified” by the facts – or will be vindicated by future developments – cannot be answered with confidence. On the other hand we do have quite a few instances here in which a worthwhile judgment can be reached. These include virtually all the cases where there has been great market activity in companies of questionable underlying soundness. Such stocks not only were speculative – which means inherently risky – but a good deal of the time they were and are obviously overvalued. Other issues appeared to be worth more than their price, being affected by the opposite sort of market attitude – which we might call “underspeculation” – or by undue pessimism because of a shrinkage in earnings.

Graham’s take on staying within your circle of competence:

Most security analysts try to select the issues that will give the best account of themselves in the future, in terms chiefly of market action but considering also the development of earnings. We are frankly skeptical as to whether this can be done with satisfactory results. Our preference for the analyst’s work would be rather that he should seek the exceptional or minority cases in which he can form a reasonably confident judgment that the price is well below value. He should be able to do this work with sufficient expertness to produce satisfactory average results over the years.

On the secret to sound investing:

In the old legend the wise men finally boiled down the history of mortal affairs into the single phrase, “This too will pass.” Confronted with a like challenge to distill the secret of sound investment into three words, we venture the motto, MARGIN OF SAFETY.

On Graham’s concept of margin of safety:

The bond investor does not expect future average earnings to work out the same as in the past; if he were sure of that, the margin demanded might be small. Nor does he rely to any controlling extent on his judgement as to whether future earnings will be materially better or poorer than in the past; if he did that, he would have to measure his margin in terms of a carefully projected income account, instead of emphasizing the margin shown in the past record. Here the function of the margin of safety is, in essence, that of rendering unnecessary an accurate estimate of the future. If the margin is a large one, then it is enough to assume that future earnings will not fall far below those of the past in order for an investor to feel sufficiently protected against any vicissitudes of time.

Graham borrowed the idea of margin of safety from investing in bonds and preferred stocks. Basically, a company needs to earn multiple times more than the cost of interest on debt before it can be consider “safe” from bankruptcy. Then he transferred this concept over to common stocks:

There are instances when a common stock may be considered sound because it enjoys a margin of safety as large as that of a good bond. This will occur, for example, when a company has outstanding only common stock that under depression conditions is selling for less than the amount of bonds that could safely be issued against its property and earning power…In such instances the investor can obtain the margin of safety associated with a bond, plus all the chances of larger income and principal appreciation inherent in a common stock…Common stocks bought under such circumstances will supply an ideal, though infrequent, combination of safety and profit opportunity.

In the ordinary common stock, bought for investment under normal conditions, the margin of safety lies in an expected earning power considerably above the going rate for bonds.

There is close logical connection between the concept of a safety margin and the principle of diversification. One is correlative with the other. Even with a margin in the investor’s favor, an individual security may work out badly. For the margin guarantees only that he has a better chance for profit than for loss – not that loss is impossible. But as the number of such commitments is increased the more certain does it become that the aggregate of the profits will exceed the aggregate of the losses. That is the simple basis of the insurance-underwriting business.

He notes that during periods when little margin of safety exists, an investor must weigh the risk of having little to no margin or losing to inflation by investing in bonds:

…for otherwise he may run an even greater risk of holding only fixed claims payable in steadily depreciating dollars. Nonetheless the investor would do well to recognize, and to accept as philosophically as he can, that the old package of good profit possibilities combined with small ultimate risk is no longer available to him.

Margin of safety is always dependent on price:

For such favored issues the market has a tendency to set prices that will not be adequately protected by a conservative projection of future earnings. (It is a basic rule of prudent investment that all estimates, when they differ from past performance, must err at least slightly on the side of understatement.) The margin of safety is always dependent on price paid. It will be large at one price, small at some higher price, nonexistent at some still higher price. If, as we suggest, the average market level of most growth stocks is too high to provide an adequate margin of safety for the buyer, then a simple technique of diversified buying in this field may not work out satisfactorily.

The margin of safety idea becomes much more evident when we apply it to the field of undervalued or bargain securities. We have here, by definition, a favorable difference between price on the one hand and indicated or appraised value on the other. That difference is the safety margin. It is available for absorbing the effect of miscalculations or worse than average luck…But the field of undervalued issues is drawn from the many concerns – perhaps a majority of the total – for which the future appears neither distinctly promising nor distinctly unpromising. If these are bought on a bargain basis, even a moderate decline in the earning power need not prevent the investment from showing a satisfactory results. The margin of safety will then have served its proper purpose.

It is our argument that a sufficiently low price can turn a security of mediocre quality into a sound investment opportunity – provided that the buyer is informed and experienced and that he practices adequate diversification. For, if the price is low enough to create a substantial margin of safety, the security thereby meets our criterion of investment.

But don’t confuse safety with the top of a business cycle:

However, the risk of paying too high a price for good-quality stocks – while a real one – is not the chief hazard confronting the average buyer of securities. Observation over many years has taught us that the chief losses to investors come from the purchase of low-quality securities at times of favorable business conditions. The purchasers view the current good earnings as equivalent to “earning power” and assume that prosperity is synonymous with safety.

Thus it follows that most of the fair-weather investments, acquired at fair-weather prices, are destined to suffer disturbing price declines when the horizon clouds over – and often sooner than that.

Thus the very class of “fair-weather investments” which we stated above is a chief source of serious loss to naive security buyers is likely to afford many sound profit opportunities to the sophisticated operator who may buy them later at pretty much his own price.

To achieve satisfactory investment results is easier than most people realize; to achieve superior results is harder than it looks.